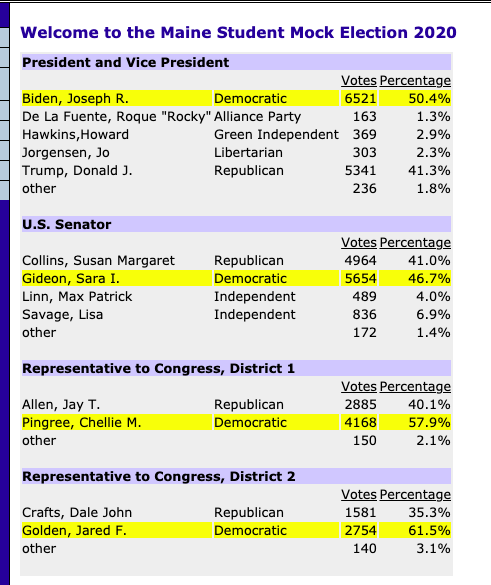 By Katrina Bunker
The 2020 presidential election, arguably one of the most life changing and heated elections in history, is just around the corner. While many people predict we won’t know the outcome on election night, Maine students, as well as those at Bonny Eagle High School, have given us a preview, based on the results of last week’s statewide mock election.
At Bonny Eagle High School, the winner of the mock election for president of the United States was  incumbent Donald Trump, who received 284 votes, while Democratic challenger Joe Biden was a very close runner up with 261 votes,
For United States Senator, the winner was incumbent Susan Collins at 284, and the runner up was Democratic challenger Sara Gideon at 231.
For the seat in the U.S.  House of Representatives,  incumbent Chellie Pingree won 295 to 278 agaisnt challenger Jay Allen.
Ms. Dawna Cyr, a government teacher, oversaw the election as the advisor to the Bonny Eagle Student Council.
“The race between Allen and Pingree was much closer than I had expected,” said Mrs. Cyr.
She was not surprised that Trump and Collins won in our school, even though statewide, Maine students chose Biden and Gideon over the incumbents.