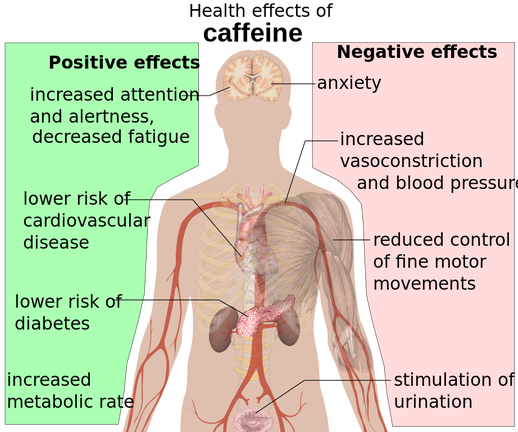 Mikael Häggström graphic. Courtesy of Wikimedia Commons
BY ALEX PINKHAM
Sometimes students are late to school for legitimate reasons. But nothing irks BE principal Mrs. Lori Napolitano more than seeing a student come into the office for a late pass bearing a cup of Aroma Joe’s coffee.
“It’s rude to come sign in tardy with Aroma Joes in your hand,” says Mrs. Napolitano. “The same is true for a job. Five years ago this would never have been a story. It's a part of American culture now to stop and get a fancy drink (on the way to work or school).
Not only is it a sign of the times, but it is also a sign of caffeine addiction - something many students and teachers can relate to.
Caffeine is a mild stimulant that works on the central nervous system. It can make you more alert, give you an energy boost, and keep you from dozing off in a boring class.  When someone who is used to having coffee every morning is deprived of it, they are likely to feel a bit foggy and they might have a roaring headache by 9 a.m., both signs of caffeine withdrawal.
While teachers can brew their own coffee in the teachers’ work rooms or offiices, students say they must must bring theirs in from the outside.
Senior Emily Brazier admits she has caffeine daily and sometimes even two to three times a day. She likes to come to school with caffeine and even admits to being late some mornings, just so she can have caffeine,
“Yes I’ve been late a couple of times, but it was worth it to have the caffeine,” she says. “The days I don’t have caffeine
are the worst.”
Aroma Joes and Dunkin Donuts are just two of the many establishments that sell caffeinated drinks all day long. While they are the closest to Bonny Eagle, they are still a 10-minute drive from the school. The morning hours at these places are especially busy and many students seem to forget how long it can take for a coffee or a “rush” to be handed out the drive thru window.
This results in students being tardy. It also results in students leaving school during homebase, or any time where they think they’ll go unnoticed, to get the moring coffee they missed because of long lines.
Senior Jewel Farley admits to leaving school during lunch or a study hall to get her caffeine fix.
“I will when I am really tired and don’t have time in the morning to stop,” she admits. “I haven’t gotten into trouble (yet).”
Mrs. Napolitano has safety concerns about students leaving the building during the school day. While she admits more needs to be done to crack down on students sneaking out during school, she says there has been a large decrease in students checking in late to school because of new athletic rules put into place this year.
“An unexcused tardy results in no practice for that athlete, and that's helped greatly with getting kids here on time,” she says.
Mrs. Napolitano also mentioned that students don’t need to leave the building anyway.
“We have coffee in the cafeteria in the morning, two kinds," she says. "It’s free if you buy school breakfast. Otherwise it's only a dollar.”