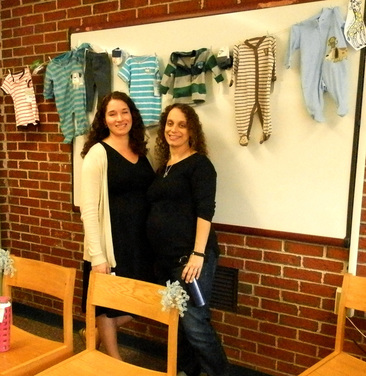 Mrs. Llia Mackenzie and Mrs. Melissa Mackenzie at their school shower.
By Megan Brown
Have you ever wondered what it would be like to be pregnant at the same time as your partner? This fall, that was the reality for two Bonny Eagle staff members, Mrs. Melissa Mackenzie and Mrs. Llia Mackenzie.
The Mrs. Mackenzies have been married for two years. At the beginning of this year they both became pregnant. Some people may think it would be hard to have two people pregnant in one house, but they thought it was “so cool.” Both say it has been like going through the best thing in your life with your best friend.
One thing that has made it better than expected is the  way they can relate to what the other is going through. If one wakes up with a leg cramp in the middle of the night, the other knows exactly what it is like; it makes it much easier to sympathize with each other.          Mrs. M. Mackenzie, a science teacher, said some of their married friends with husbands are jealous at the way they can relate. Mrs. L. Mackenzie, an ed tech, said that “having your best friend next to you through one of the most magical experiences in life is incredible.”
Mrs. L. Mackenzie’s due date was originally Nov. 8, but it became necessary for her to have her baby three weeks early. She had a healthy baby boy named Jackson Kye.
When asked about the early delivery, Mrs. M. Mackenzie said “Jackson...apparently couldn't wait to see the big world! Everyone is happy and healthy, getting settled, and busy figuring out a routine that works!”
Mrs. M. Mackenzie is due on Nov. 25. On the last Sunday in September they had a double baby shower that 50 people attended. This helped them to get the items necessary for preparing the nursery, which the babies will share.
Mrs. L. Mackenzie had been getting really crafty with the preparations, and was said to be “addicted to Pinterest”.
Although they are mostly prepared, they still are experiencing the normal worries of pregnancy. Of course, they are worried about having two rambunctious boys and about juggling the duties associated with two babies instead of one.
Mrs. M. Mackenzie thinks that it will be “cool with two moms” because the duties of mothers can be split. She also said they don’t really know what to be worried about.
She says her wife has had more experience changing diapers, and it is easy to see the faith that they have in each other. Though they have the typical worries of expectant mothers her wife, Mrs. L. Mackenzie says I “know we can do anything with each other’s support and the support of those around us. Most of all, we are excited for this new chapter in our story.”