Season's Greetings? Whatever you choose
By Zackery Estey 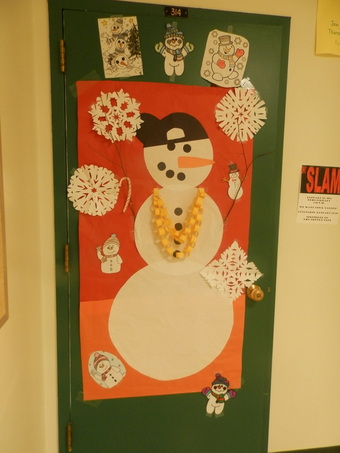 One of the festive classroom doors at BEHS this year. Staff Photo.
It's that time of the year again, when the snow starts falling and jackets come out of storage. But along with this holiday season comes the annual debate about whether to wish a holly jolly ‘Merry Christmas!’ or to cover all the bases with ‘Happy Holidays’.
Some who favor 'Merry Christmas' say the more generic greeting is offensive and part of the secular "war on Christmas." Former vice presidential candidate Sarah Palin recently wrote a book that advanced this idea.
Those who favor 'Happy Holidays' point out that December hosts other major holidays and celebrations such as Hanukkah, Kwanzaa, Winter Solstice and the newest addition to the calendar: HumanLight, a secular holiday, on Dec. 23, celebrated around the world since 2001. They say there is a reason America is known as the great melting pot: we have so many different cultures and traditions being brought into this country every day. You can’t just assume what holiday someone celebrates simply based on appearance.
"I think people say 'Happy Holidays' instead of 'Merry Christmas!' because they fear the perceived repercussions of being seen as insensitive or politically incorrect,” says English teacher Mrs. Meaghan McCrea.
But Mrs. McCrea and many others at Bonny Eagle High School don't think it's politically incorrect to extend Christmas greetings. She says she has many friends of different religious and cultural backgrounds who are more than fine when others wish them a 'Merry Christmas!'
“I do not think it is at all offensive to wish someone a "Merry Christmas!" if they don't celebrate it," she says. "Just as I would not be morally or spiritually offended if someone happened to wish me a "Happy Hanukkah!" or "Merry Kwanzaa!"
Senior Taylor Almeida agrees. “Even if it is not my religion, I feel that if someone takes the time out of their day to say 'Merry Christmas,' then that means I am important to them. So no, I do not take offense to that," she says.
Surveys by the Pew Research Center resulted in an interesting view on the seasonal debate. When subjects were presented with an option of ‘Merry Christmas' or 'Happy Holidays' as a greeting, 57% of the surveyed Americans preferred ‘Merry Christmas’ while 27% chose the generic ‘Happy Holidays’.  Another 15% reported that they had no preference. However, when the option, ‘Does it really matter?’ was introduced into the equation, an astounding change in results occurred. Support for ‘Merry Christmas’ dropped by 15%. ‘Happy Holidays’ also lost some of its support. The grand totals ended up being 42% for ‘Merry Christmas’, 12% for ‘Happy Holidays’ and 46% saying it doesn’t really matter to them.
Bonny Eagle students also seem unconcerned about the choice of greeting. An informal survey of 15 students in the cafeteria during lunch A  revealed that 13 out of the 15 students had no preference. Those 13 said that it really didn’t matter. However, the other two both preferred 'Merry Christmas.'
“I say 'Merry Christmas,' but that's because I was raised saying it. I don't care what people say to me; the fact that someone said it to me makes me happy," said junior Nora Steiger.
“I say 'Merry Christmas,' and I do not find it offensive to hear it all around me," added senior Dakota Salley. "Saying that I can't say whatever I choose is a suppression of religion just as much as me saying 'Merry Christmas' to you if you do not celebrate Christmas. I think it's silly how many toes are stepped on with good intentions.”
A physics teacher, Ms. Julia Bemis, feels the phrases ‘Happy Holidays’ and ‘Merry Christmas’ convey a similar message to the receiver. In her view, they both express the hope that "all goes well for you in the coming year, stay safe, and have fun celebrating with family and friends," she says.
So say what you want, and say it proudly, Bonny Eagle!