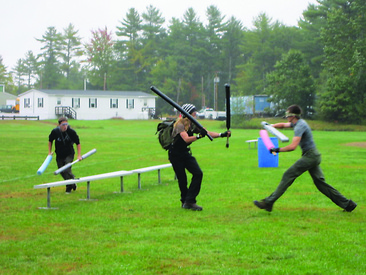 Senior Brian Murray on the attack!
By Tye Greely
It rained hard for much of the first day of the BEHS Outing Club’s Nerf Hunger Games Sept. 29. So, some potential participants, or “tributes”  as the competitors are called in the books, were discouraged by the weather and didn’t show up.
But Mr. Tony Lucchese,  the driving force of the event, was still pleased with the outcome.
“It was brilliant. It was a blast,” he said. “I think the rain actually enhanced the experience; it made us feel a little more rugged and dirty.”
Strategic game plans, rugged and dirty weather, unexpected eliminations: a few of the ways to describe how the first-ever BEHS Nerf Hunger Games unfolded on Sept. 29 and 30.
The goal was to introduce the new Outing Club to the student body and raise money for its activities.  Close to 50 people participated in  the games, with others in attendance either posing as officials to keep order or wanting to witness the games as spectators.
The game was designed to simulate the “hunger games” in Suzanne Collins’ popular trilogy. Each day began with students lining up at the bus garage field, where Ms. Andrea Johnson, one of the Outing Club advisors, counted down and blew a whistle, initiating the start of the the first session of games.
Tributes bound wildly towards the cornucopia, where supplies and weapons were stored, eager to begin eliminating others in their quests for triumph.
One tribute, senior Brian Murray, stood out above the others, winning four out of the eight games over the weekend, absolutely dominating anyone who stood in his path.
“It was entertaining to watch him play,” said Mr. Lucchese. “He would just stand in the rain for about 45 minutes near the cornucopia and wait for the other students to come back ... He said he did fencing when he was little so that gave him a big advantage.”
With Brian dominating the games after three sessions, the “gamemakers” made the decision to have the entire games fought in the woods, so as to give the other tributes a chance.
At this opportunity, some other students developed a strategy of their own: wait around at a certain spot in the woods, and once another unsuspecting peer walked by,  attack. This proved to be a successful game plan for Hannah Ketch, who surprised everyone with her kills.
“It was a really exciting experience for me,” said Hannah, a junior. “I even killed Brian Murray when I surprised him in the woods!”
Now that the Nerf Hunger Games are over, and the winners of the events are satisfied with their victories, it’s time for Mr. Lucchese and the Outing Club to begin planning the next Nerf Hunger Games in the spring.
“The playing field will have to be changed up a little bit in the spring, accounting for the fact that the fields will
be flooded with meltwater from the snow,” said Mr. Lucchese. “But I am still excited to find out who the victors of the next Nerf Hunger Games will be!”