"Herstory" is a popular new class 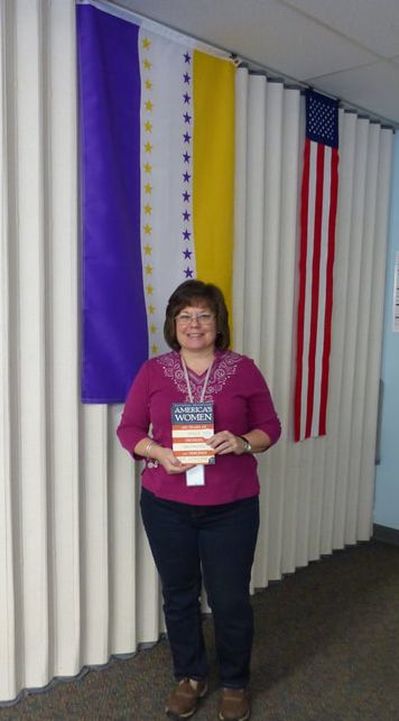 Mrs. Dawna Cyr, the creator of the Herstory class, poses with the textbook and a replica flag from a suffragist convention. Photo by Joanne Lannin
BY ABIGAIL KOVACS
One of the most frequently-asked questions of any high school student—and perhaps the bane of many teachers’ existence—is the inquiry “When are we ever going to use this?” The answer varies depending on subject. However, when it comes to Ms. Dawna Cyr’s new women’s history class the answer is clear: always. When we think of the role females have played in defining our past, their contributions are often minimized, misrepresented, or omitted entirely. Ms. Cyr is hoping to change that. Her course, appropriately entitled “Herstory,” addresses the absence of women in history, science, art, and politics, by making their experiences the center of a story traditionally recorded and reported by men.
“I love history, but we we always learn about the men—never about the women,” Ms. Cyr reflects, “I wanted to know more about women. I knew they made significant contributions, but unfortunately, many of them go unrecognized.”
Many students echo her sentiments, expressing excitement at the chance to explore another historical perspective.  “Instead of his story we are learning about her story, the part of history that was never really told,” explains senior Evan Smith. “Before taking this class I had no clue how much women have contributed and how hard life was for them back then.”
“​I wanted to learn more about the women that got us the rights we have today,” says senior Tia Lavigne. “I knew that the rights we have took a lot to get, but I never knew how much until I took this class.” ​
Ms. Cyr emphasizes that a comprehensive, unbiased understanding of history is crucial regardless of gender. “It’s a brand new world for the male students,” she says, “it’s really nice to understand the other perspective. We’ve taught so many classes from a male perspective, but now we’re getting her side of the story.”
Since starting the course second trimester, the students have already explored a wide variety of topics related to women and the role they played in defining our past. As Evan summarizes, “We are examining women’s history by looking at a number of aspects including diaries, letters, artworks, court documents, music, needlework, and many more. So far, we have learned what life was like for the women of New England, colonial women, Native American women, and African American women, as well as women in the North and South before, during, and after the Civil War.”
​      “It’s not so much focused on major events as much as the lives of women and where they fit in,” Ms. Cyr clarifies. “It’s best almost better-termed as a ‘social’ history as opposed to an event-based history.”
She also notes that the class is unlike many others offered at Bonny Eagle. “Sometimes our topics are a little sensitive. We talk about courtship, weddings, contraception, abortion, medical issues. We try to pull out some of the famous women along the way and dispel some of the myths about them," she says. "We have a very free-flowing conversation. Nothing’s off limits.”
The class is only in its first year, but it has already gained many engaged participants. ​”I look forward to coming to [herstory] because it isn't your normal class,” explains Tia. “You are always involved in some way…my favorite part is having more freedom to say what’s on my mind.”
“I have 26 students right now,” says Ms. Cyr. “I think they were excited because I was excited. I’m hoping that it becomes a regular, and that it will be offered every trimester. It’s just something that’s totally different. I hope that more will be interested and willing to take it, and will add it to their repertoire.”
“Although it is new and there are some rough spots, I am enjoying the class and would recommend it highly to others,” says senior Nathan Carlow, “Ms. Cyr is very passionate about her work and it shows. For such a broad field of study, it's very easy-going and inclusive.”
Despite its popularity, Ms. Cyr explains that creating herstory as part of her Master’s coursework wasn’t easy.
“I’ve never spent so many hours with my nose in a book,” she jokes.  "On average, for every class that I teach, I’m probably spending anywhere between four and five hours prepping. I’m not content to teach from one source because I want to put so much in. I keep telling my students, ‘the more I learn the less I know,’ but I would rather have way too much than too little.”
With Women’s History Month only a month away, the importance of a class which celebrates diversity of experience is clear.
“Taking this class has deepened my understanding of just how much women have contributed, even those movements that some consider to be underappreciated,” says Nathan.
“I would stay back a year just to take that class,” Evan agrees. “When I looked back, it occurred to me that a vast amount of important information on women was never mentioned in the normal history classes. Women definitely have played a big role and I think it is necessary to know what they have done.”
As Ms. Cyr concludes, “We have to understand where we’ve been to understand where we are now, and how to move forward and change it. With the #metoo movement, sexual harassment coming to the forefront, women’s rights, equal pay, I see the students of today being the ones who are going to go out and make those changes.”