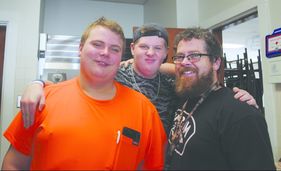 BY LEA PILLSBURY
On Wednesday’s the special needs students load the bus from the high school and are taken to the Jack Memorial School. Their faces light up as soon as they see Chris Pillsbury, who started the program in 201, with the hopes of teaching students in the special needs department to cook and have everyday life skills.
The students yell “Hey Chef” and go in for personalised handshakes and hugs.
One of the students, Dean, says “My favorite thing about coming here is seeing Mr. Pillsbury, don’t tell him this but I think of him as an older brother”.
Pillsbury has always been a chef, working at places such as Fore Street and Becky’s Diner, running the Royal River Grillhouse, and previously having two restaurants of his own. He had always thought his passion in life was cooking and being creative in the kitchen, but when he began working as an ed tech as a side job, the special needs kids began to have a huge piece of his heart.
Chris had the plan to teach the students basic kitchen skills so that they would be able to both cook for themselves, and eventually get jobs in the food industry. In order to do that they would need a kitchen, so they began to use the kitchen at Jack Memorial School - where adult education classes are held. Each week Pillsbury comes up with a lunch menu that the students will help make and then deliver to teachers who pay for it each Friday, costing $5 each week. They make things from chicken wings with mashed potato and glazed carrots, to lasagna with homemade biscuits.  Although the program idea came from the mind of Chris Pillsbury, he says that he could not do it without everyone else's help - especially Chris Ross.
Mr. Ross is a new ed tech that started in the middle of the 2016-2017 school year. Ross attended culinary arts school but says “My real passion has always been to teach special needs kids how to cook, and this program is allowing me to follow that dream”. Ross says that the students really look forward to going over to Cooking with the Scots each week and talk about “Chef” (Pillsbury) all the time. Both Ross and Pillsbury work together at the River Tap and Grill at Salmon Falls Country Club.
Since Pillsbury runs the restaurant he has to spend the majority of his time there, working around 90 hours each week, but he still prioritizes this program into what little free time he has. All of these students are very important to the both of them. Ross now takes the job of taking the students shopping for the food each week, getting a list from Chef Pillsbury, taking the kids to hannaford, and teaching them both how to grocery shop and handle money so that someday they will be able to do it themselves.
Thirteen to eighteen students go to Jack each week, they are separated into groups and rotate through different stations - cooking in the kitchen and doing dishes, OT, speech, arts and crafts, and money skills. All of the students seem to have their personal favorite.
One of the students Brandon, says “My favorite thing is helping people”.
His friend James says “My favorite part is seeing my friends”.
Alissa adds “My favorite part is the arts and crafts”.
The students have learned appropriate knife skills and knife safety in the kitchen, and have cooked recipes that most of the mainstream kids at BEHS have never even heard of. Some of the students have even started going to PATHS culinary program because they discovered their love for cooking. Both Pillsbury and Ross explain that the program instills confidence into these kids. In the beginning some of the other adults would explain that certain students do not do well in class and to not expect much different in the kitchen, but Ross and Pillsbury both say all of the kids do extremely well, and truly enjoy themselves.
Pillsbury says “All of the students do really well in the kitchen, you just need to give them a chance, I wish everyone could recognize that these students can do anything they set their mind too.”
And their faces light up when they see the finished product. All of the students have came so far since the beginning, two former students and one current student have even earned themselves a job at the River Tap and Grill. Having the idea of getting to work with their role models, Ross and Pillsbury, seems to make the students want to work even harder. Just in this one day, the idea of working for “chef” was mentioned multiple times by multiple students.
The money made from the program goes towards the end goal of having enough money to put on a cookout in the spring for the students, their parents, and even administration from the high school. This gives the students something to work towards, knowing the money will in the end get them a fun day for a reward.