This generation of students is marching for their lives 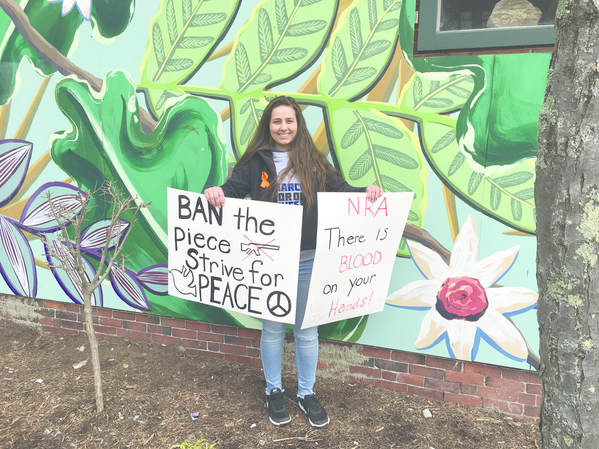 Eagle Times senior editor Abigail Kovacs carried signs during the March For Our Lives rally in Portland, Maine last March. Abigail Kovacs photo.
BY ABIGAIL KOVACS
EAGLE TIMES SENIOR EDITOR
Students should not have to go to school in fear. Students should not have to pass through metal detectors and peer out tinted windows. Nor should teachers have to arm themselves or practice safety drills and lockdowns.
These procedures exist because we have failed as a nation to protect our citizens. As we walk through these hallways each day, it is easy for us to grow accustomed to the precautions, the nebulous fear that looms over our heads, the cable news reports proclaiming another 10, 20, 50 dead.
But as I listened to the words of Parkland students, and more recently, the eulogies from Santa Fe, Texas, it dawned on me that one of the longest, most influential relationships I’ve ever had has been with mass shootings.
By today, I will have lived through 34 major mass shootings, and those are only the ones that made the news. In 2018 alone, there have already been 23 school massacres in which someone was killed or injured—close to one each week—with 288 tragedies since 2009.
The United States has experienced over 10 times the number of school shootings than the rest of the world combined. I was just 12 when a gunman murdered 20 first graders and six teachers in Newtown; and while the adults around me debated the Second Amendment and the merits of gun control, I remember going through a massive tonal shift when it came to my perspective on my peers, security, and the culture that allowed this.
My parents had wars and I had dead schoolchildren. I remember becoming cognizant of the metal detectors, the lockdown drills, and the evacuations when someone decided to pull a sick practical joke and call in a bomb threat, and I started to grow wary.
Then I was 13 and there were another six dead in Santa Monica. I was 14 and seven had been gunned down at the University of California. I was 15, and there were 10 dead at Roseburg.
I grew accustomed to turning from passionate rage to desensitized resignation. I watched my parents and teachers shake their heads with their eyes glued to the television, and I felt helpless in the face of bloodshed. The count was now 1,091 dead children, and still nothing had been done.
Politicians in the pocket of the National Rifle Association (NRA) insisted that now was not the time, that it was a lone madman who had been bullied. Open Secrets reported that the NRA flooded the 2016 election cycle with over $50 million dollars worth of spending in races around the country, and its influence was apparent.
Dianne Feinstein’s 2013 assault weapons ban failed, Carlos Curbelo’s 2017 Automatic Gunfire Prevention Act to ban bump stocks stalled when the NRA voiced its opposition, and the 2016 Terror Gap Bill which would have added suspected terrorists to the federal background-check system was rejected by the Senate. Politicians seemed to have nothing to offer us but “thoughts and prayers.”
But then I was 17, and 17 more were dead at Parkland. This time it felt different. Those students, like me, had grown up in this system- they knew how it would play out and they were not going to be kept silent. These teens elbowed their way into one of this nation’s most vicious policy debates, demanding to have their say. As Emma Gonzalez, a Stoneman Douglas senior, explained at a rally in February: “Every single person up here today… should be home grieving. But instead we are here standing together, because if all our government and president can do is send thoughts and prayers, then it’s time for victims to be the change that we need to see.” The survivors have traveled to Tallahassee, Florida, and Washington, D.C. to make their case for stricter gun laws. They have organized protests and marches and rallies that, thanks to social media, have spawned similar efforts.
Inspired and encouraged by their activism, I attended the March For our Lives in March were I watched thousands- many of them my age and younger- flood the streets of Portland. I listened to moving speeches from students, I called my Congresspeople, and I registered to vote. That day, we proved that this was a sustained effort, that we would fight to institute mandatory background checks, raise the minimum age to purchase firearms, vote out the politicians who took blood money from the NRA, and place bans on assault rifles, bump stocks, and high-capacity magazines. Politics had forced its way into my classroom through the barrel of a gun, but I was not going to be a victim of my own inaction.
However, for our efforts to be effective, we have to keep fighting. For too long, we have let the politicians and talking heads dictate a conversation our generation needs to have about gun control and the fight against violence. We grew up on these mass shootings. The victims, and often the perpetrators, are people we know. Parkland shined a light on the disconnect between those who write the narrative and those who are actually living it. Our leaders have proven time and time again that they will do nothing to stop this violence from continuing. Instead, we need to join together to demand change. We need to educate ourselves, our peers, and the adults around us; but most importantly, we need to make our voices heard in the voting booth- for that is the only place where we are equal.  ​