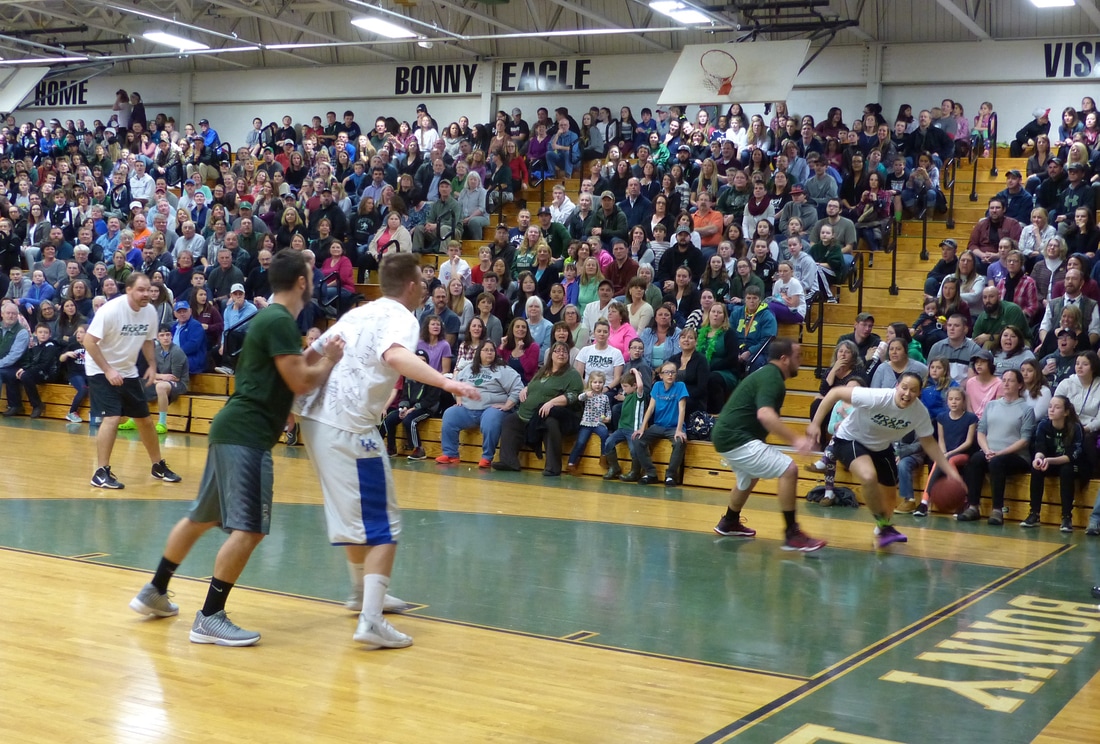 The stands were packed to see the high school take on the middle school in the benefit basketball game. Tana Ross of BEMS dribbles past Mr. Rick Hession, but BEHS won the contest. Staff photo.
More photos from the game
On March 2, Bonny Eagle High School hosted its first annual high school vs. middle school faculty basketball game, showcasing an incredible outpouring of community support.
The game was intended to raise money for Charlotte Regan, an assistant principal at Buxton Elementary School, (and Coach Scott Regan's wife), and Heather Pike, a parent and multiple booster group member.
Both Mrs. Regan and Mrs. Pike are currently undergoing treatment for cancer, making the proceeds of $4,590.50 a crucial contribution.
“Both the Regan and Pike families are going through a tough situation. The game is being used as a benefit to raise money and donations for the families to make times a little more enjoyable, less stressful and to help as much as we as a community can,” said Mr. Michael Ronan, a member of the high school team.
In past years, the school’s Fight Against Cancer Society (FACS), has donated money to cancer research. This year however, the funds were given directly to the the Regan and Pike families.
The idea for the game came after a parent and an athlete from the girls basketball ​team approached athletic director Mr. Eric Curtis about doing a fundraiser for Mrs. Regan. “Coming from the middle school, I thought it would be a fun competition between the two schools,” explained Mr. Curtis.
More than 1,000 teachers, students, and community members showed up to cheer on the teams and lend their support to the Regan and Pike families. Girls basketball players coached the respective squads in a game that was full of exciting moments and some light-hearted ones as well. After a slow start, the high school showed its superiority in the second half and came away with the victory. According to Mr. Joey Luchini, the game was a lot harder fought than he expected it to be.
A game trophy, donated by Mrs. Peg Maxwell and the Fight Against Cancer Society FACS student group is currently on display in the high school office and will remain at the high school until the middle school wins in some future year.     In addition to an exciting competition, the game also featured halftime contests such as musical chairs and basketball drills, as well as a 50-50 raffle which raised more than $300.  In yet another act of charity, raffle winner Ms. Diane Nadeau donated her 50-50 raffle winnings to both families.
“Tonight has touched us so incredibly deeply,” said Mr. Regan in a post on his Facebook page. “Our community showed up, demonstrating the “Scot Pride” that we have come to see over and over during our 25 years of living and working in Bonny Eagle.”