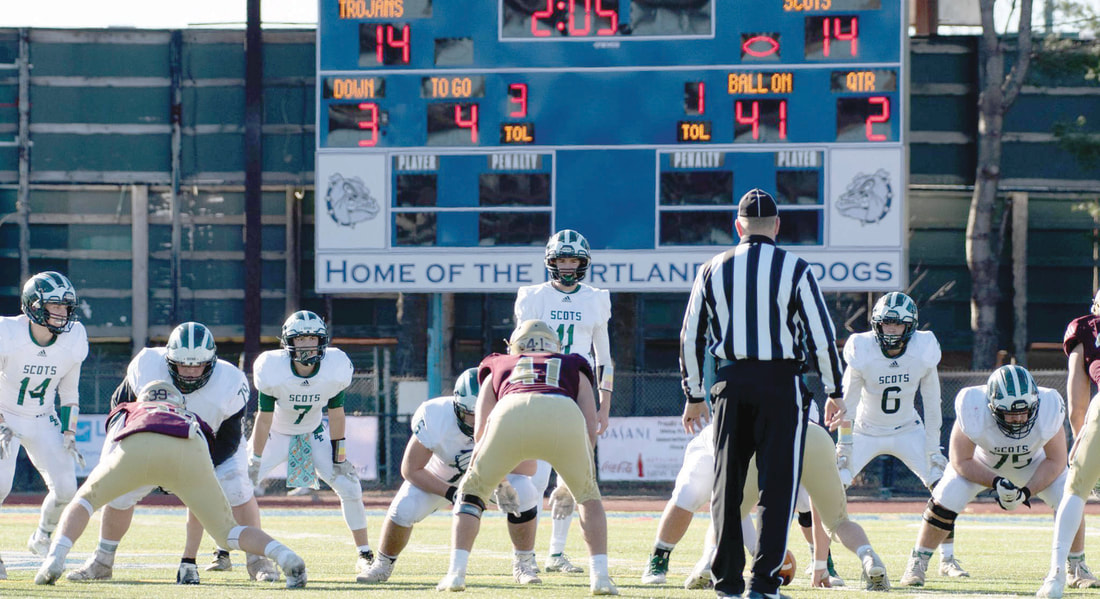 The Scots scored on this drive and never looked back, beating TA 34-21 for the state championship. Lisa DeMarco photo.
BY WILL HUGHES
​November, 2019
November 23, 2019. This  date will not soon be forgotten by the members of the Bonny Eagle football team or its fans. Last year's football season ended in disappointment for the Bonny Eagle Scots. The team was eliminated in the second round of the playoffs in a crushing loss to Scarborough. This season started in a manner similar to last year, with the Scots winning their first four games. However, the team was determined to have a different ending. To make sure of this, Coach Cooper and the team aimed to constantly improve and be better every game, hoping to play their best game of football on Nov. 23, the date of the state championship game.
This year, The team was lead by captains Will Horton, Sean Brilliant, and Nate Ferris. And going into this season, there were already aspirations of a state title.
“Right from the get go, we thought we could play in the state championship game,” Coach Cooper claimed.
The team finished the regular season with 8 wins and 1 loss. The one loss was a 21-14 loss at Thornton Academy. That record was good enough for second place in Class A and matched the team up with Lewiston in the first round of the playoffs. The first matchup with Lewiston had been a 54-14 blowout, and the second one wasn’t much different. The final score was 48-0. Next up was Scarborough, which was no doubt going to be a tough game. The regular season matchup against Scarborough was a defensive showdown, with a final score of 18-7.  Once again, the playoff game was quite similar. An overtime period determined the winner of this battle. Bonny Eagle got the ball first and scored. All Bonny Eagle needed after that was a defensive stop, and that’s exactly what they got. The final score of that game was 14-7, which matched the Scots up with rival Thornton Academy in the state championship game.
The one loss of the season to Thornton had stung the Scots. It was a close game that the Scots could’ve possibly won. But some costly turnovers proved to be their downfall that night. Revenge was never really a factor in the championship rematch, however, and the loss may have actually helped the team.
​    “I don’t think we talked about revenge. We just wanted to play our best and wanted to win,” explained Coach Cooper.  “If it happened to be TA (Thornton Academy) great; if it was another team that would be fine too. I do think that regular season game helped us. We came out of that game thinking that we could’ve won if we didn’t make some mistakes.”
The Scots did indeed learn from their mistakes, and were
able to defeat Thornton Academy for the state title by a score of 34-21. This was Bonny Eagle’s seventh championship in 16 years.