BERT 133 gets into gear hoping for another successful season 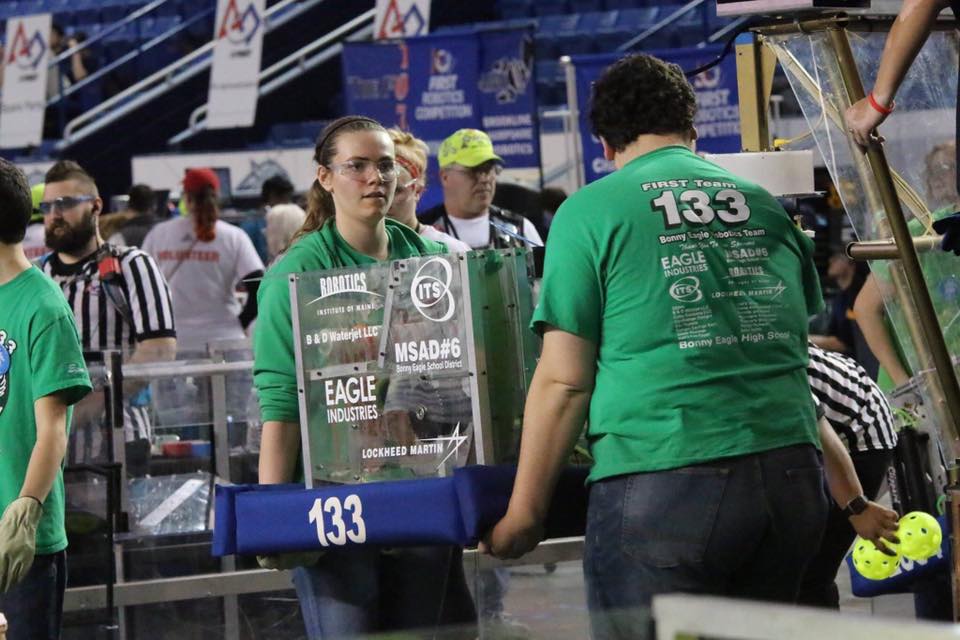 A photo of BERT 133 captain Amber Lindberg during the 2017 competition in which the robotics team came in ninth. BERT 133 photo
BY KADY MURPHY
​    ​High school students around the world question what the future will look like. Will there be robots to do our work for us? We might have the answer to this question because of FIRST, an organization dedicated to spreading the recognition of science and technology. FIRST Robotics Competition is the subdivision of the program for high-school aged students, and it’s also the program in which our MSAD 6 robotics team, BERT 133, competes.
​    Every year, FIRST reveals the theme of the competition season. Last year’s theme was "FIRST Steamworks." This year, the competition is called "FIRST Power-Up" and is video-game themed. Robotics teams from all over the world have six and a half weeks to build their robots and prepare for competitions. BERT has been brainstorming the best ways to tackle this year’s game.
​    “We’ve taken what the game is, gone through the rules, and learned what we can and can’t do. From there, we came up with prototype designs and now we’re building the actual robot,” says junior Logan Matthews, who has the most build hours on the team so far.
​    In addition to building this year’s robot, the team, led by a mix of mentors and students, is still fundraising for competitions. Currently, members are continuing to sell calendars for a calendar raffle in February. Contact any team member for more information. They are also planning to hold a bottle drive after the build season ends.
​    BERT was ninth in the world in 2016 and qualified for the world competition again last year, but were unable to go. “Our goal is to win worlds,” junior Nate Gagnon jokes.
​    BERT dominated at their first competition in Massachusetts on March 17 and 18. Their robot, Q-Bert, was ranked first out of 40 teams and had a win-lose ratio of 16-2. The team chose teams 319 and 1289 for their alliance in the finals and won against teams 125, 238, and 6731.
​    “I think the coolest part of our robot is the hook, so it can climb with other robots,” says senior Carly Meserve. Q-Bert used this ability to climb with their alliance partner, 319, in the final matches.
​    BERT attended the Pine Tree district competition in Lewiston on March 23 and 24, ranking first again out of 40 teams. Q-Bert ruled the competition with a win-lose ratio of 16-2 and led the first alliance in the playoffs. Their win qualified them for the New England District Championship in Boston. Along with the competition win, the team won the district Chairman’s Award.
​    The robotics team attended the FIRST World Championship in Detroit, Michigan from April 25-28. BERT was the first pick of the third alliance and advanced to the semi-final matches before being knocked out by the second alliance. Overall, the team placed 14th in the Carson division with a win-lose ratio of 6-4. ​ 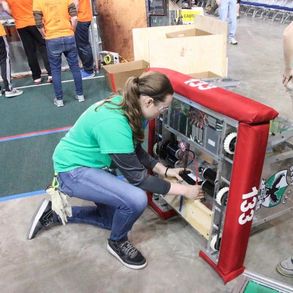 Sophomore Amber Lindberg works on one of BERT's two robots during the competition at UNH. BEHS Robotics team photo
Bonny Eagle's robotics team, BERT 133, came in 31st at the three-day, head to head district championship competition at the University of New Hampshire, a finish that qualified them to return to St. Louis again this year for the World Robotics Championship. Sadly, the team has decided not to go because of lack of funds. But that doesn't take away from their repeat accomplishments this year in what is termed the "varsity Sport for the Mind."
This year 64 teams participated from around New England on April 6-9  in the Whittemore Center Arena at UNH. This year’s game was called "First Steamworks," an industrial airship-themed competition consisting of two alliances of three robots each trying to maneuver themselves into position to shoot balls into a giant catch basin. You can watch some of the action in the BERT 133 videos at this link.
BERT 133 has already started fundraising for next year in hopes of being able to advance past the regional competition. They will hold a bottle drive on April 15 in Buxton at ITS inc.