They gave us lots to cheer about
By Cassidy Merrill 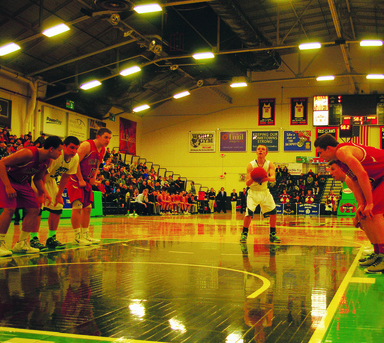 Dustin Cole will play on a bigger stage next year.
The Bonny Eagle boys’ basketball team’s season ended the same way it  did last year -- with a loss in the Western Maine Class A final. It was a premature end to a successful season, but one with high expectations.
As Mr. Mike Morong, a teacher at Bonny Eagle Middle School points out however, “Sometimes we forget that in our four consecutive losses in this Western Maine title game we have never lost a tournament game to a team ranked lower than us,” he said in a Facebook message. “That is a credit to our coaching staff and players.”
Going into the 2014 playoffs, the boy’s basketball team had high expectations because of its successful previous three years. The three starters from last year’s team were junior captain Ben Malloy, junior guard Nick Dubay, and senior captain Dustin Cole. New to the team this year were Nate Alexander, from Edward Little, and Jon Woods, from Gorham.
Even though Nate and Jon were transfers, they became starters by working hard for their positions and proving they belonged on the court. But credit also goes to the players whose places Nate and Jon took on the starting team.
“It speaks volumes to me as a coach to see the players who had to take a step back and to do so humbly because these guys came in,” said head coach Phil Bourassa. “I think it opened their eyes a bit, but they have handled it like true team players.”
Another reason for optimism was how the team came together and bought into Coach Bourassa’s philosophy.
“We are a close team of 15. That 15 is a little more than a family. It is a brotherhood,” said senior Nate Schopen,
“The team is emotional and passionate, in all the right ways,” Coach Bourassa said.
According to Dustin Cole, the feeling was mutual. “(Coach) teaches us much more than the game of basketball. He makes us all well-rounded individuals, pushing us to have the best character, be the best athlete and try to be the scholars he knows we can be,” Dustin said.
The hardest part of losing may be seeing the career of Dustin Cole come to an end. This year he made the school proud, with many accomplishments including Southern Maine Athletic Association (SMAA) Player of the Year, a nominee for McDonald's high school all-American award, and a semi-finalist for Maine Mr. Basketball.
Dustin finished his career with 1,812 points. He was the second all-time leading scorer in the history of Maine Class A basketball, and he led the SMAA in both scoring and assists.
Not only that but Dustin is someone who is looked up to by fans, players,  coaches, and younger kids who consider him a mentor.
“Dustin is the one in practices who pushes you to be your best,” says teammate Nate Schopen.
Dustin is planning on going to college for business. He has signed with Franklin Pierce University in New Hampshire, where he will play Division 2 basketball on a full scholarship.
Dustin hopes to go oversees to play one day and although he'd rather be a player all his life than a coach, we are sure that basketball will follow him wherever he ends up.
“The sky is not the limit for Dustin -- there isn’t one,” says Coach Bourassa.
As for next year, a strong core of players are returning: captains Ben Malloy and Zack Dubiel, and Nick Dubay, and Matt Smith. Also, the JV team just recently won its season tournament.
“Four seniors will be tough to replace,” said Mr. Morong. “But, Bonny Eagle has well prepared them for future endeavors.”