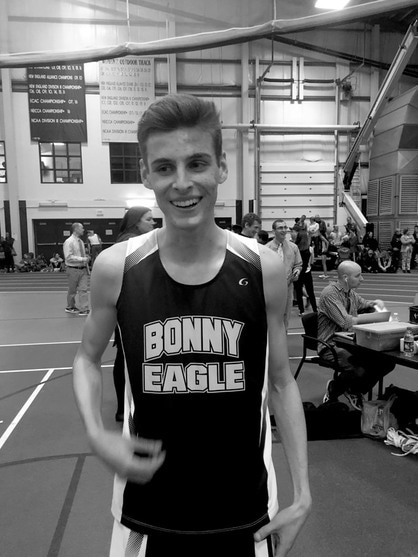 Senior Ben Steeves was happy with his times at the state indoor track meet in February. Photo courtesy of Ben Steeves
By Shea Harrington and Cam White
Senior Ben Steeves is known by many throughout the district as both a skilled runner and a talented artist. He has recently garnered awards for his prowess in both of these activites. We sat down with Ben recently to get to know a little bit about both sides of this talented artist/athlete.

Eagle Times: What is your favorite type of art?
“That’s hard but probably painting. I really like acrylic painting”

Eagle Times: When was the first time you realized you had a talent for running?
“In middle school, my gym teacher was always saying, ‘Oh, he’s got such a fast mile’ and stuff, and then in fourth grade I did track—outdoors, and I thought it was pretty fun.”

Eagle Times: So your gym teacher was really an inspiration for you back then?
“Yeah, he was actually. When we did the mile in gym class, I thought it was fun, and I was good at it.”

Eagle Times: What awards have you won in track and field?
“A few as an SMAA all-class runner for the 800 and 600, and then I got MVP for Bonny Eagle.”

Eagle Times: What are your best times for the events you currently run?
“My best time for the 600 is a minute and 15 seconds, and then for the 800 my best time is 1:57 -- which got me second at states and qualified for New England’s where we ran in Boston at the Reggie Lewis Center. That was a good experience, but I didn’t do too well; just because of the competition I think.”

Eagle Times: It must have been cool going there, though?
“Yeah. It was really cool, because it was actually a banked track instead of a flat track. It was a lot different to run on. I think I could have been faster with a little bit of work on it beforehand. But it was cool. Our relay team actually ran the [4x800]. We were the first Maine team to finish. That was cool.”