Dangers of vaping don't deter teens from trying it

By Molly Austin
​October, 2019
You may be familiar with the minty, or fruity smell in the school bathrooms. You also may be familiar with the source of this smell. Juuling, which is a form of vaping, is a national problem among American youth. Kids all over the country are getting addicted to nicotine easily covered up with fun flavors like watermelon, mango, mint, and even tobacco.
According to the Centers for Disease Control, the number of high school kids who vape almost doubled in one year, from 11.7% in 2017 to 20.8 % in 2018. High schools and middle schools all over the country have been sending out notices and announcements trying to encourage the discussion over nicotine and its lasting effects on developing children.
Bonny Eagle High School is no stranger to the Juuling epidemic. Mr. Michael Johnson, the principal at BEHS, is working with his team to stop nicotine addiction among the student body.
“First and foremost, my job is to keep the children of BEHS safe. As a result, Ms. Maguire, Mr. Noonan, and I are 100% committed to identifying Juulers in school and getting them the help they need,” he explained.
The school drug and alcohol counselor Cyndie Lane is where kids go when they need help with addiction. If a student is caught Juuling on school property they will be referred to Ms. Lane, but many continue seeing her on their own.
“I can see maybe 10 students a day and a majority come volentarily,” she explains. “Oftentimes they are referred, but they come back on their own.”
Mr. Johnson is anxiously waiting for Maine legislators to pass a law to make it illegal for retailers to sell Juuls. A law like this has already been passed in the state of Massachusetts. Many wonder, ‘how many students actually Juul regularly’? Mr. Johnson believes it would be a mistake to speculate about the exact number of regular users, but he believes that the number is “actually a lot.”
Juul is marketed as an alternative for cigarette smokers who want to quit smoking. However, teenagers overlook the risks of nicotine addiction, and many non-smokers do not understand why. Mr. Johnson says that “it depends on how old you are. An adult might have one reason but a teen might have another, like peer pressure. Adults use juuls because they have some sort of addiction to nicotine or other substances; however, a teenager is naturally curious by nature and initially would experiment with Juuls as the result of simple curiosity.”
Being an adult at a high school, one might have a different view on how Juuling affects the students, while an actual student may have another. BEHS senior Kayla Hodge believes that Juuling is “stupid and it can kill you.” So why do so many do it? She answers that “in their eyes, it is considered cool, and they’re rebelling against the rules.”
Juuling doesn’t only affect the person doing it, it also affects the people around them. You can see the effects on many teenagers.
Kayla said, “I know people that do it and it affects their sports, their homework, their social life, and their money.''
Kids are spending their money on Juuls and Juul pods, and the addiction distracts them from their school work. Many kids that Juul take it with them everywhere. They use it in their cars, in the school bathrooms, and even in class. The fruity smells make it easy to cover up. Some student-athletes Juul despite knowing the health risks. You can see in some athletes the shortness of breath and fatigue.
Bonny Eagle has taken steps to fix the problem. There are posters at every bathroom trying to raise awareness. There are divided opinions at the school on whether or not the posters are actually doing any good. Mr. Johnsons says, “Yes, however having said that awareness is only the first step to solving the problem.” However, Kayla Hodge says “it does not because users want to rebel and they take it as a joke”.
Like any other major problem among teenagers, it is going to take a lot of time to fix the juuling epidemic. Proper education in health classes is only one step that is already being taken to lessen the number of students smoking.

Athletes from more than a dozen southern Maine schools and agencies participated in the Special Olympics April 28. To see our gallery of photos from the day, click on the photo. Staff photo
More than 700 athletes lined up to take their place in the annual  Cumberland County Special Olympics early Friday morning, April 28. According to Amanda Thiele, co-coordinator of the event and a special education tech at Bonny Eagle Middle School,  “This was a big turnout this year, not just with the athletes but also with volunteers. More than 200 students were willing to come out and not just help but to support their teams.”
The athletes participated in a number of different events including relay racing, long jump, and wheelchair racing. Bonny Eagle High School Ed Tech, Mrs. Vickie Thiele, (Amanda’s mom) said, “There was a lot of cheering, smiling faces, love and compassion.”
Alisha Gagnon, the speech and language teacher at Bonny Eagle High School said, “I love how we all came out cheering for everyone and not just for our school. We even help out everyone and again not just for our school. I like that.”
Amanda Hayes, ed tech at Bonny Eagle High school said, “The Special Olympics was a heartwarming event.  It was wonderful to see so many students and teachers support our athletes.”
In addition, many parents expressed “overwhelming joy” at seeing their cildren doing all these events. One mother said her heart was filled with love. “Seeing my daughter run, even though she was the slowest, she tried her best and it made me cry.”
​    One thing is sure, seeing all those amazing faces light up with smiles and happiness and knowing they had a fun day made all the hard work of preparing for the event worthwhile. 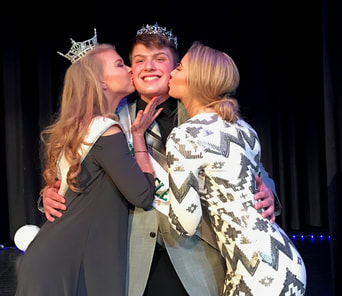 Left, Miss Maine Mary Anne Noonan congratulates Zach Klein. Student Council vice president Maddy Jarvis is on the left. Dawna Cyr photo
Bonny Eagle High School’s Student Council and the Class of 2018 teamed up to put on a brand new fundraiser called Mr. Bonny Eagle on  March 31. The competition was open to juniors and seniors and junior Zach Klein came away with the title and the crown.
The seven juniors and two seniors who entered the contest competed in four categories: talent, sportswear,  evening  wear, and  on-stage  question.  Along with the title of Mr. Bonny Eagle, a Mr. Congeniality award and a People’s Choice award were given. Zach Klein was voted People's Choice and senior Vincent Grant was voted Mr. Congeniality.
Senior Maddy Jarvis, the Student Council vice president, was very excited to initiate the new event and said, “We are hoping to create a new tradition at Bonny Eagle.”