Ms. Maguire earns her award as assistant principal of the year 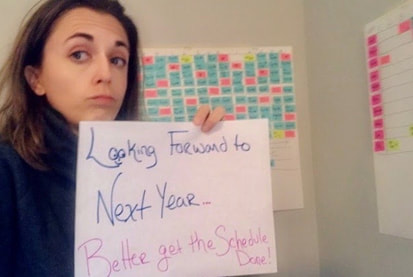 “The tricky part in leading is you can’t lead through fear. You have to lead through hope and compassion, even when you are afraid." BEHS Assistant Principal Ms. Erin Maguire.
BY MACEY CABRAL
April 30, 2020
Bonny Eagle's Assistant Principal Ms. Erin Maguire should have been in Augusta yesterday, receiving her award as Maine Principal's Association's Assistant Principal of the Year. Instead, she was doing what she's been doing every day since March 16: meeting online in Google Meets and Zoom sessions with staff, parents, students, and administrators. While she won her award for accomplishments in the "normal" realm of school, her efforts this spring in helping Bonny Eagle transition to online learning certainly deserve praise.
“She absolutely earned this recognition,” said Mrs. Lori Napolitano, who was BEHS principal last year and nominated her for the award. “Ms. Maguire is the full package. Not only is she amazing with students and families, but she is a true instructional leader as well.”
Ms. Maguire was very surprised to learn that she had won the award. “I’d be lying if I said this was an easy year,” she confessed, adding that after working with Mrs. Napolitano for so long, “I lost the person that knew all the answers.”

When she first heard that school had been shut down for a couple of weeks, Ms. Maguire was struck with a wave of fear, coupled with an uncertainty of what the future held. She worried as to how she could fill the minds of teachers with faith, hope, and strength.
“The tricky part in leading is you can’t lead through fear,” she said, “You have to lead through hope and compassion, even when you are afraid.”
After the initial upset, her thoughts moved on to figuring out how teachers could be supported, and how time could be divvied into answering all of their questions, as well as giving them all available information as it came, information that constantly changes to this day. Still though, she retained a sliver of hope.
“The first week I clung to the idea of coming back after April break,” Ms. Maguire remarked, “But my college degree is in math/statistics, I knew better the whole time, but convinced myself otherwise!” She went on to say, “It didn’t matter if we prepared ourselves. The shock of not going back to normal this spring was devastating.”
The new schedule for the middle school and high school was created by Mrs. Napolitano, then revised by a team of district administrators. Over the course of three days they worked out all necessary details that would make this new setup doable for teachers and students; then they presented teachers with the plan, part of which required that every teacher use Google Classroom. Ms. Maguire noted that Mrs. Susie Simmons, the Tech Integrator, had a huge part in making that happen, helping teachers to move online.
With the new opportunity of meeting with the Cumberland County Administrators virtually every week, something that has never been available before, Ms. Maguire found that Bonny Eagle was “significantly ahead of the curve" when it came to our online learning plan. Because we had started at the beginning of the trimester (unlike other schools that split the year in quarters), remediation did not have to be factored in. This made the job much quicker and easier. It took less than a week to get everyone up and running.
"Keeping kids engaged in online learning is a tremendous and difficult task… any little bit helps," she says.
It’s no secret this has caused a lot of big changes. However, not all of them are negative.
“I actually think our teachers are meeting and collaborating more often,” observed Ms. Maguire. They meet weekly to organize, discuss, and make decisions. No matter your age, she said, having to stay at home is lonely and messes with your mind. These meetings can be for both professional and personal support.
Unfortunately, “we’ve lost that human element,” she said, “the one where you get to know each other student-to-teacher and learn each other’s quirks… Identifying when a kid is struggling or having a bad day but [doesn’t] know how to express that is gone in this setting.”
The challenge has been trying to “find new ways to connect with people, which becomes either slower, because you are navigating timelines and numerous people, or less individualized and personal because you met with a small group or sent an email instead.”
There’s no easy way to really connect with people, students and adults alike without talking to them face-to-face, in person.
Ms. Maguire described the biggest challenge, which is “overcoming the emptiness.” Schools both educate and provide a sense of community and belonging. The struggle is trying to recreate that sense, to keep the community together. There are students throughout the district that struggle under the normal circumstances, she explained.
“How do we not lose them? How do we not lose each other and our community?”
Out of this, there are a handful of beneficial aspects. For one, she says, “We are seeing that some students thrive in this environment. Who would have thought?” Additionally, this provides an opportunity to learn from what’s going on now to improve things later.
Overall, Ms. Maguire “couldn't be more proud of our teachers right now. Their effort, hours, engagement and ingenuity has been awe-inspiring. They are tired, working more hours than their normal week to make sure they give to you their ultimate best.” Times are tough, and everyone is doing what they can to make this easier. “I’ve never been so BE proud,” she added.
As June approaches, one of the main concerns that has arisen is how to celebrate the Class of 2020 which has been robbed of its final traditions and traditional celebrations at BEHS. She said that “the idea of not having the normal pomp and circumstance, and closure with our Seniors hurts my heart. For four years they’ve been ‘our kids’, how do we now thank them, celebrate them, and say goodbye?”
It’s uncertain how different things will be in September, if we go back at all. Until mid-July, it won’t be clear what consequences will have been thrust upon school in the fall. “For now,” said Ms. Maguire conclusively, “we cling to hope and revel on how well students and staff have done so far.”
As for her award, Ms. Maguire feels that this achievement does not solely belong to her. “I don’t think the recognition is just mine,” she expressed. “You don’t earn something like that without being part of a community,” which she explains includes good teachers, good leadership, good teammates, “and good kids.”
“So,” she continued, “I think we earned it; I don’t necessarily think I did… I just come and do my job every day.”