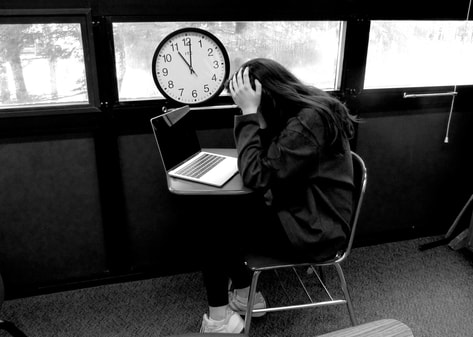 BY MACEY CABRAL
With the school year half over, students are still adjusting to the laptop curfew that went into effect in September. Principal Mrs. Lori Napolitano explained part of the reasoning behind the decision was that many parents had sent complaints of their children staying up too late. Though the policy stems from parents’ concerns, Principal Napolitano says, the “final decision was [mine].”
She also explained that the middle school laptops shut off at 10 p.m, but this seemed too early for high school students.
When students returned to school and were informed of the change, some were outraged. Senior Allie Carpine says she was offended by the policy and she thinks it is counter-productive.
“No one’s going to get up at five in the morning to do work,” she says.
She believes that if kids are forced to wake up earlier to finish work, it’s not really helping their sleep schedule.
One freshman, Elise Ruona, says that she now has to do her work in “a rushed manner,” especially on nights when she gets home late from an away game.
“It’s very frustrating when you’re in the middle of writing an essay or doing legitimate schoolwork and it shuts off,” says Elise.
She recalled a time when she was working on a science project, but her laptop shut down before it could be completed. She said that she tried to get up at 5 when the laptops turned back on, but she was too tired to focus, so the assignment was not finished and not turned in on time.
“And this is affecting my grades and it’s very frustrating,” Elise argues. “I’m not putting out the best quality work that I can because of this new rule.”
Principal Napolitano states that when life interferes with schoolwork, “it’s pretty rare that people have no choice.”
She believes that time management is an important skill that everyone needs to have, and there should always be a way to complete schoolwork.
She says that many parents had complaints of their kids on social media or Netflix instead of going to sleep. She says that one reason for the changing of schedules is the lack of sleep many students get on a nightly basis, and this new schedule was designed to help limit that.
Sophomore Mia Kovacs, a class officer, had a somewhat philosophical outlook on the subject, pointing out some of the unintended consequences of the curfew. Mia explained how studies have shown that “kids our age” need more sleep, and that studies have also shown that looking at a screen at night is “really bad for your sleep.
I totally agree where they’re coming from,” she said, “but I don’t agree with the policy itself,” adding that students, especially upperclassmen, are  “almost adults, yet they still have to give us bedtime, which I think is ridiculous.”
Mia says she and many of her peers will find other ways to get their work done, even if it’s not completed by 11 p.m. “And, for a lot people, they don’t have super fancy expensive laptops they can do their work on….like, for me, we have a really old, slow laptop that crashes literally any time you try to do anything.”
Mia adds that she would use her phone, but as many know, attempting to use Google Docs or Drive on one’s phone can prove to be a strenuous task. Because of this, she says, any homework she doesn’t finish by 11 p.m. takes longer to finish on the old, slow laptop. Thus, she has to stay up even later.
Mia says that many “kids our age” do sports, other after school activities, or have jobs, so they get home late.
“So, it’s not a matter of us just procrastinating or us just wanting to watch Netflix late at night,” she says.
“A lot of the times, it’s good students, who are trying to do other extra curricular activities and sports and have jobs,” Mia continues, “and they simply don’t have the time to do all of that, and I don’t think it’s fair to punish those kids, because there might have been some kids who were inappropriately using their laptops after 11 o’clock.”
Research confirms that teens need 9 to 9 ½ hours of sleep each night. Spanish teacher Mr. Stephen Fox agrees, saying “It’s a necessity.” He said that he values sleep over getting work done because “you can’t do your schoolwork effectively”.
But not all students assign the same value to a good night’s sleep. Freshman Vaida Smith replied, “On a scale of 1-10, I think sleep would be an 8 ½.”.
Others feel that homework takes precedence over sleep, such as Elise Ruona who says, “Homework would be like 7/10 because you [have to] get that stuff done.”
She explained how important school is to her, and how she’s more likely to be found staying up late, finishing an assignment on her phone, as opposed to sleeping when the laptops shut off.
At this point, according to Principal Napolitano, the curfew is working so far -- at least from parents’ points of view. As for the future, “We’ll have to wait and see,” she says.