Rhode Island Red spends the day in the principal's office 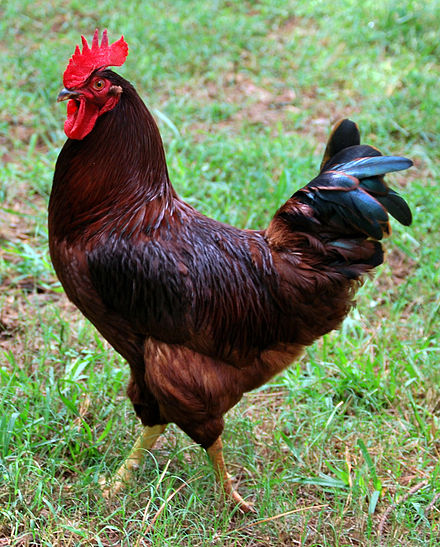 ​By Macey Cabral
The Rhode Island Red can be found in most backyard flocks. Known for their hardiness, they are meant to be outside (or in a coop). So, the sight of one of these fine birds bolting down the hall by the cafeteria on a chilly Thursday morning raised some eyebrows, along with the attention of Head Custodian, Ms. Edith Ricker.
Ms. Ricker divulged that she apprehended the rogue Red with ease.
“I went in and grabbed my coat, threw it on top of [the chicken] to startle [her], and then I just grabbed for [her] legs,” she explained with a chuckle.
The hen was brought to the office, where it stayed in a box for the rest of the day. A family member of the student who brought the chicken in picked it up and returned it home.
“Rosa,” as she was officially dubbed by Assistant Principal Ms. Erin Maguire, was free for less than 10-15 minutes before being rescued. However, in that time, some students reportedly kicked at and briefly chased the hen.
According to Ms. Maguire, bringing a livestock animal into a “public setting,” particularly in how the bird was transported (in the student’s backpack), is considered animal cruelty.
Animal cruelty is also criminal mischief, a chargeable offense in Maine. The repercussions, if charged, is the confiscation of all pets, no matter the species. Neither the offender nor anyone who lives with him is allowed to have pets.
Ms. Maguire says that animal control officers explained this when they arrived at the high school. Luckily for the student, they did not press charges, and he was merely given a warning. He was also suspended from school.
The student in question said that he was dared by his peers to bring the chicken into school, and so he didn’t think about the consequences. Now that he knows the consequences, the student said that he will definitely not do something like this again.
“Everybody asks me [that] and I say no,” he said.
Editor’s note: The Eagle Times can’t reveal the student’s name because he is  underage and his suspension is a confidential matter).
In the past, there have  been only a few incidents of students slipping in with a furry plus one, mostly because there is a district ‘no fur no feathers’ policy that prohibits students from bringing such animals, excluding approved service animals.
“In my five, six years here, I don’t think I’ve run into anybody bringing an animal to school in that sense,” Ms. Maguire noted.
There have been some verified comfort animals in the school, including ferrets and chinchillas, she adds. They never left the main office. There was even an occasion where a student brought in a dead fish they had caught, and plunked it into a bathroom sink.
“No fur or feathers, so technically within policy,” Ms. Maguire remarked.
There was even a time when another chicken wandered in from across the street, though it came of its own accord. It was shooed in by a student, then captured and returned (this was two or three years ago).
According to Ms. Ricker, during the summer, when there was construction going on, the doors to the school were left open. This was apparently an open invitation to local rodents.
“[We] used to chase squirrels,” she explained, as well as rogue chipmunks.
As for Rosa, her freedom was not long lasting, and “luckily, the chicken did not cause any damage,” Ms. Maguire said. “But that box was gross when she left.”
Begotten bread held Rosa over throughout her confinement, and in the end she was safely returned home. The alternative ending to this could have been tragic, so let this story serve as a warning to any potential jokesters. Don’t bring your pets to school. Just don’t.
​
​