Rachel Litif was all the buzz this winter 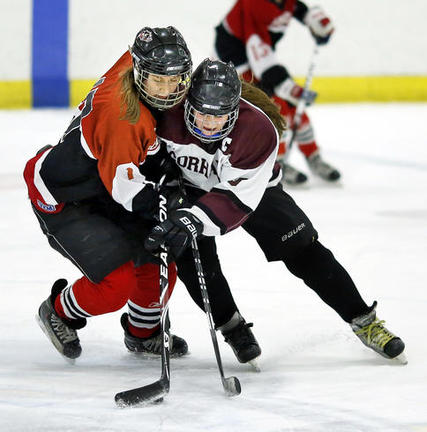 Rachel Litif fights for the puck. Photo courtesy of the Portland Press Herald.
By Jessie Ray
Women’s ice hockey may not be the usual talk-of-the-town, but here at BEHS, senior captain and defensive standout, Rachel Litif, was all the buzz this winter. Rachel was twice named Player of the Week in Western Maine, Class A. She’s been team MVP since freshman year -- when she first started playing with girls instead of boys.
Rachel finished her career as the leading scorer in the history of the program. This past season, she scored 29 goals and had 20 assists to increase her career totals to 90 goals and 44 assists. She also won the inaugural Hobey baker Character award and has been selected to the Maine senior all-star team.
By her side were sophomores Victoria Richards and Allison Rullo, who also have logged some major minutes on the defensive end of the ice. These three girls represent Bonny Eagle on the Gorham girls ice hockey team.
You might wonder about girls from two different schools playing side by side, but head coach Nat Germond believes their unity is their greatest strength.
“You wouldn’t know they don’t go to school together,” says Coach Germond.
Gaining four new players this season hasn’t cut off the girls’ relationship, either. “We’re like one big family,” Rachel says.
With every new season comes new goals for the team, and this year, Coach Nat’s and his assistant coach, Mary Guimond’s, goals were simple: improve the overall fundamental skills of the team, and compete in every game to the best of the teams ability. Some skills the girls improved upon are things such as skating and passing.
“The girls are a blast and very coachable and are eager to improve,” says assistant coach Mary Guimond.
All of the hard work seemed to pay off about halfway through the season with a 3-0 win against their rival Portland.
“It was probably the biggest win of our season because it was our goalie’s first shutout,” Rachel explains, “It felt good to leave the rink that night.”
Unfortunately, Gorham/Bonny Eagle finished the season Feb. 2 with a 7-11 record and didn’t make the playoffs. But for  coach Nat and high-scoring Rachel Litif, this season has been a meaningful one.
“Rachel Litif is the best all around player in the state in my perspective,” says coach Nat, “I’ve been coaching Rachel since she was a little kid in Huskies (USM’s youth hockey program). She will be missed greatly when she graduates this year, although we will still be able to watch her play in college!”
Currently, Rachel has been contacted by the University of Southern Maine, the University of New England and also Sacred Heart University in Connecticut. She plans to major in sports medicine or athletic training, but you can be sure that hockey will be a part of her future wherever she ends up.