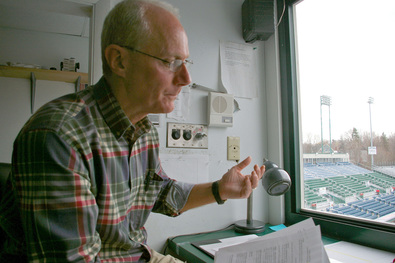 Mr. Coughlin rehearsing before a game at Hadlock Field. Staff photo
By Eva Bean
When Bonny Eagle High School students and teachers listen to Portland Sea Dogs players being announced  at Hadlock Field this summer, they might recognize the voice of the announcer. Mr. Paul Coughlin, a teacher in the alternative education program at Bonny Eagle High School, was chosen from more than 100 candidates to be the new announcer for the Red Sox Double A team's home games this year.
“I get thrilled just attending any game,” he said recently. “Now, I get to see 71 games, show-off a bit at each, and do it from one of the best seats in the house!”
Mr. Coughlin replaced Dean Rogers, who stepped down after 19 seasons behind the microphone.
"Our selection committee was impressed with the sound of Coughlin's voice," stated Geoff Iacuessa on the Sea Dog website. "We believe his voice will resonate well with the fans throughout Hadlock Field. He is both passionate and knowledgeable about the game of baseball, quick thinking, and is someone who will fit-in well with our staff."
Mr. Coughlin is well versed in baseball. He was introduced to the sport at the young age of four. His father would bring him to pick-up games and he played from Little League right up to the college level.
When the BEHS track coach, Mr. Greg Wilkinson, showed him the ad in the local newspaper about the announcer position, Mr. Coughlin was excited. When asked what made him decide to apply for the job, Mr. Coughlin replied, “I was asked this question in the second interview at Hadlock Field. I assured management that I love baseball and I love to talk.”
To show his skills during his audition, he first read some script in the booth. Then he had to announce a mock Opening Day at Hadlock Field.
“It was a lot of fun,” Mr. Coughlin said. “So perhaps that is part of what they noticed.” He is very excited for the new job and ‘counts himself among the fortunate.’  Certainly, many people are looking forward to going to the Sea Dogs this upcoming season and hearing a new voice over the loudspeakers.