The journey from BEHS to News Center 6 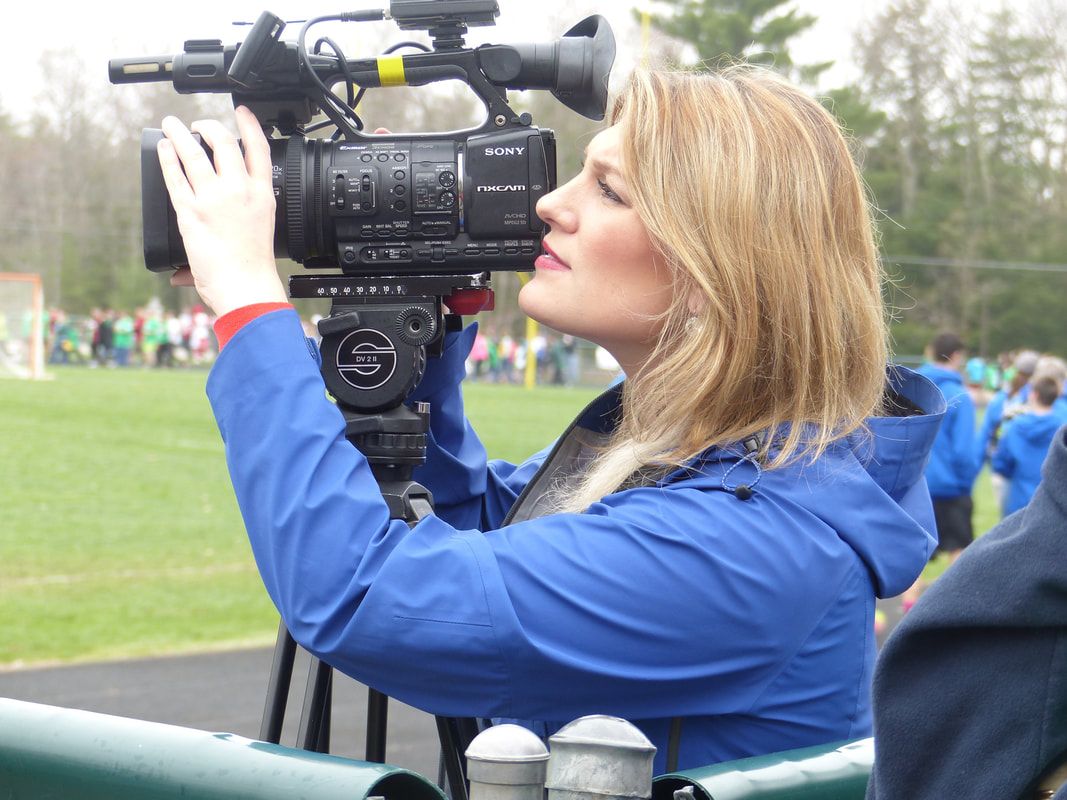 BE grad Samantha York came back to the school to cover the Special Olympics last spring. Eagle Times archive photo.
​BY BRENNA FINN
Have you watched Channel 6 News lately? If so, you might have seen reporter and 2010 Bonny Eagle graduate Samantha York on your television screen. Samantha joined News Center Maine during the summer of 2014 soon after graduating from the University of Southern Maine with a major in Media Studies and Communications.
Samantha says she always loved writing in school. Her English teachers, Mrs. Kathy Field and Mr. Dan Murphy, pushed her to pursue a career in journalism. To gain experience, Samantha took over the school’s morning announcements for the athletic director and narrated school and library introduction videos, which helped her learn the functions of a camera. She also started "BE in the Spotlight," a radio show that talked about what was going on at BEHS.
Students in the class of 2010 assumed her career would involve acting, since she had gotten the senior superlative for “Most Likely to Become an Actor.” She was involved with the school theater and also performed community plays throughout her high school career. Samantha was cast as Cinderella in a community theater play as a freshman. During her senior year, she was Eliza Doolittle in My Fair Lady and Ado Annie in Oklahoma. Samantha’s love of theater, freshman through senior year, and journalism inspired her to join WJZF, Bonny Eagle High School’s radio station, as a sophomore.
One of Samantha’s favorite aspects about being a general assignment reporter for Channel 6 News is the fact that every day is different. She explains that it is really nice to always have something new to look forward to. Another aspect of being a reporter that Samantha likes includes the people she gets to see every day. Samantha makes many connections with the people she works with and those she interviews for her stories,
“It’s very rewarding,” she says.
One of her favorite stories was a feature about raising awareness of domestic abuse. Samantha met a woman victim that made her realize that anyone can gain the courage to overcome adversity. She explains that story in particular was impactful, and hopes that it will affect the people that read the story.
“Anytime you can create change, that is my favorite,”  Samantha explains.
There are stories that Samantha enjoys covering, but there are also challenging ones. Recently, she covered the Joyce McLain murder trial, a 38 year cold case that was finally been brought into the courtroom. Samantha explains that courtroom cases are challenging for her because everything happens in the blink of an eye. She got to know the family of Joyce McLain, and she says that learning the details of the case was an emotionally intense experience.
“At the end of the day, I’m still a human,” she says.
Samantha also loves to cover the heartwarming stories. Last spring, she covered the Bonny Eagle Special Olympics and got to see some of her old teachers.  Samantha has received much support from family and even teachers, including Mrs. Field.
According to Mrs. Field, Channel 6 News has always been her channel. Now, she watches it more than ever to catch Samantha’s stories. Mrs. Field remembers Samantha as a freshman who displayed two great qualities in the classroom. She was very curious about things, and wanted to know more about anything she learned in the class. Samantha also had empathy for people and was compassionate, according to Mrs. Field.
“I’m so proud to say that I knew her,” she says.
Not only does she have great support from her teachers, but from her mother as well. You may have seen Mrs. Diane York, an administrative assistant in the main office, but not known her daughter was a reporter for News Center Maine. Mrs. York feels proud of Samantha and explains that her husband is also giddy about their daughter's success.
Mrs. York says she always imagined that Samantha would be doing something on stage, so it was a surprise to her when her daughter wanted to be a reporter. Mrs. York’s favorite story that Samantha has covered was the Wreaths Across America story, the wreath-laying ceremonies to honor veterans. Samantha’s family only wish the best for her future in reporting.
“I think our hopes are that she will anchor locally, settle down and have a family, so I can be the cool grandma.”, Mrs. York explains.
Samantha thinks that becoming an anchor one day in the future would be fun.
“But what is most important to me is that I continue to tell stories that impact change and touch lives in the state I love most: Maine,” she says.