Nowhere to run, nowhere to hide 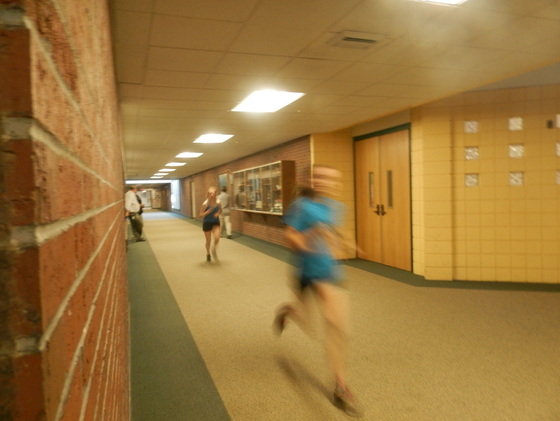 You might yourself face to face with a sprinter when you cross the halls of BEHS after school. Staff photo
By Megan Brown
Sophomore Hannah Lapointe was sprinting through the halls one day this past season, doing her workout in preparation for her next indoor track meet when some members of the boys’ team came running around the corner. One of the boys was able to dodge Hannah, but the other was not so lucky. Hannah ran into the boy, knocking him to the ground as she continued running.
Collisions like this have became all too frequent after school as the boys’ and girls’ teams practice in the halls of BEHS.
Unlike other sports teams, the track squads do not have a practice facility designed for their workouts. The only designated space is in the hallways, along with some limited gym time when the basketball teams are not playing. As a result, anyone who has walked in the halls between 2 p.m. and 4 p.m has had to avoid collisions by looking both ways when entering halls, and then dodging the runners when walking through.
Mrs. Amy Doucette says that for her it becomes “very challenging leaving the building,” and it is like “taking your life in your own hands.”
She is not the only teacher who feels this way. Mrs. Kathy Demers, the head of guidance, finds that walking the halls “can get scary.”
Chris Strout, the girls indoor track head coach, agrees that this is a tough situation,  not just for passersby, but also for the track athletes. The members of the track team do not enjoy having to practice in the hallways, although they are happy to have a place. Many times workouts have to be modified to work in the hallways. Dillon Bates, a coach for the boys track team, believes that Bonny Eagle teams have a disadvantage compared to competing track teams that have field houses where they can practice.
Senior Shawna Meserve finds that practicing in the hallways makes it so she “can never put 100% into a workout” because of the constant interruptions to her workouts.
Not only does the practicing situation affect how much effort can be put into a workout, it can also greatly affect runners’ times. When practicing, many runners are trying to hit certain target times necessary to a quality workout.
Senior Kristin Glennie has found that “crowded hallways can really throw off split times.” If she is forced to stop running because of people blocking the way, it slows her time, especially because she then has to build up  speed again. This can undermine the workout, causing the benefits to be significantly less.
Running in the halls also has many damaging effects on the bodies of runners. Injuries become much more common when practicing inside because of the surface the track teams must practice on. The carpeted and tile floors have no give to them and are hard on the body.
Coach Strout says that every indoor season there are always a lot of shin splints, which are the direct result of running too fast on an unforgiving surface.
The worst part is running around the tight corners of the circular hallways. These corners put the most pressure on the body, and do not only lead to shin splints, but also many other issues, including knee problems and muscle strains.
To avoid the problems that come with practicing in the halls, teams try to stay outside on the track until it is snow covered or too cold. The boys team sometimes practices at the middle school or at a later time to open up some of the hall space.
Athletic director, Mr. Kyle Hodson, agrees that the practicing situation is “certainly not ideal.”
He says that until a new school or an addition to the current space is built, renting an outside facility is the only option. The teams have begun renting the fieldhouse at USM when it is not being used, which is rarely. Also renting the USM fieldhouse costs the school $150 per hour, which adds up.
For now, teachers, students, and track athletes will just have to remember to look both ways before crossing the halls of BEHS.