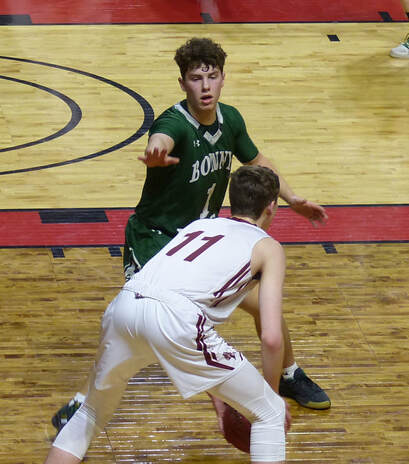 Co-captain Zach Maturo led the Scots on both offense and defense. J. Lannin photo
FROM STAFF REPORTS
​       Despite a furious fourth quarter comeback, the BE boys basketball team fell to Bangor Saturday night in the state championship game at the Cross Arena in Portland.
The boys lost to a team that had dominated Class AA all season long, thanks to their 6-6 center, Division I-bound Matt Fleming. But the Scots' defense almost upended the Rams, bringing them to within 3 points with less than four minutes to play. Foul shots proved the difference as Bangor won 58-48.
Zach Maturo ended the game with 19 points and Jacob Humphrey added 11. Both will be back next year.
​    Bonny Eagle ended its season under first-year coach John Trull with an 18-3 record.