Halloween storm disrupts a week of school in MSAD6 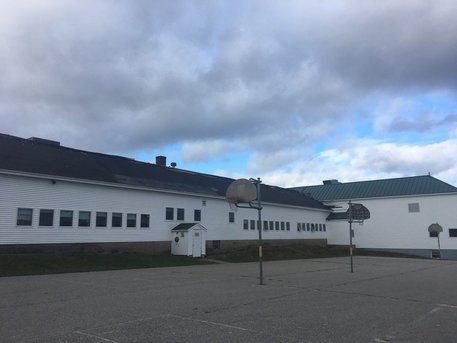 The storm blew off the roof of the George E. Jack School in Standish. Jennifer Long photo
BY MADISON CHAYER
Making the calls as a superintendent isn’t easy. There’s a long process that goes with it. MSAD 6 superintendent Paul Penna had to deal with extra stress during the time of the big storm on Oct. 29. Mr. Penna loves a good challenge, and this was the biggest issue he’s had to deal with as superintendent. When deciding whether to call off school, he had to look at the safety issues, concerns, conditions, and much more. Since, there was a lot of issues and concerns, he decided to call off school.
“MSAD 6 was out of school almost the whole week,” said Mr. Penna. "It still wasn’t safe for the bus drivers to be driving because of all the trees and power lines that were down. That means all the bus routes and bus stops would’ve been changed because of the trees and power lines. It was, of course the best choice for everyone living in MSAD 6."
The district returned to school Friday, but with a two-hour delay instead of a full day of school. It was all about safety for Mr. Penna. There were still some concerns having to do with the bus routes. On Thursday, the day before we had school, transportation got all the bus drivers to drive their routes to see if there were any issues with them. The bus drivers would report back and they would determine if the roads were safe enough to be driving on. The late start gave bus drivers a maximum amount of light to see the roads. Giving a late start, “gave me a much better mind of having a school day.” Mr. Penna stated.
Of course, there were complaints about taking days of school off, but that didn’t bother Mr. Penna. He did take into consideration that there might be kids left home alone because of the parents with jobs, but he just had to hope that the kids had the supervision they needed. He can’t just open school for child care. He thinks that it just has to do with parenting and the parents have to be responsible enough to either take off work to be with their kids or bring them to a friend or family member’s house.
The storm interrupted sports and other school activities. But, but snce the drama club and the football team had big events coming up, they were given the opportunity to practice at the school. Of course, Mr. Penna said he thought about the safety and thought that if the students were safe enough to get a ride from their house to the school, then they should be allowed to practice. The drama club had a big play coming up and football had a big game coming up, and of course they needed practice. Mr. Penna said it would be fair to give them that time.
Everything in the district was back to normal Friday, except for one school. The George E. Jack elementary school's roof was ripped off by the wind. Repairs and water damage had to be taken care of.
“It’s like the Wizard of Oz,” Mr. Penna said.
The kids from George E. Jack school were moved to the middle school until the roof was repaired. Almost everything in the school was brand new after the storm had passed. When the school was redone, the roof was given layers, carpets got all the water sucked out of them, and rooms were redone due to water damage. Luckily, the students were allowed to go back into their school last Monday.
“They are happy to be home.” Mr. Penna stated.
Although there were some complaints, he believes he did his best to make it a safe environment for everyone. He was happy with his decisions because no one got hurt, and everyone was safe. If something like this were to occur again, he said he would handle it the same way.
After the fact, Mr. Penna said he was confident in the decisions he made.
​     “No, I can’t say I regret the decisions I made,” he admitted.