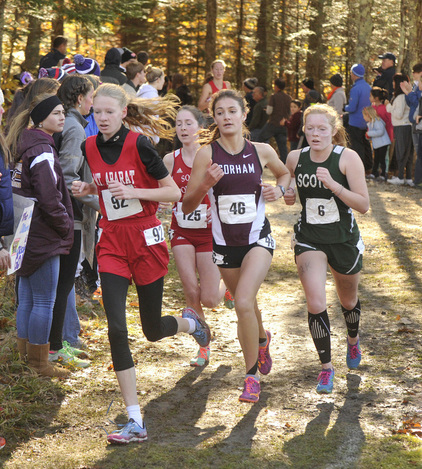 Kialeigh Marston, right, led the BE girls to a third place finish. Portland Press Herald photo.
The Bonny Eagle girls cross country team won the Class A state championship for the third time in four years.  The meet took place last Saturday in Cumberland.  Bonny Eagle held off defending champion Scarborough by 18 points.  Senior Kialeigh Marston was third overall, and classmate Elisabeth Redwood seventh. The rest of the Scots’ scorers were freshmen: Ami Beaumier in 6th place, Abigail Nelson in 21s, and Kayla Raymond in 35th.
"I will say that it was a team effort to win the state championship," said Coach Andrea Johnson.  "Kialeigh Marston and Ami Beaumier held their own as front runners for the team coming in 3rd and 5th respectively.  Elisabeth Redwood ran an outstanding race to come in 7th overall and set a personal record.  She was seeded 30th.  Abbie Nelson came in 21st, and also ran her fastest time of the season. Kayla Raymond came in 35th after passing around 20 people in the last mile.

"It's amazing that such a young team could pull off such an amazing feat of winning not only the state championship, but the regional meet just a week earlier.," continued Coach Johnson.  "Elisabeth and Kialeigh lead the team with their experience of running in previous state meets.  All of the girls brought drive and determination to give everything they had."
Six teams will compete in the New England championships on Nov. 14 in Thetford, Vermont.  Bonny Eagle will not participate as a team, but will send two runners, senior Elisabeth Redwood and freshman Ami Beaumier, to compete individually.  The six schools will be Orono, Yarmouth, Scarborough, Greely, York, and Massabesic.