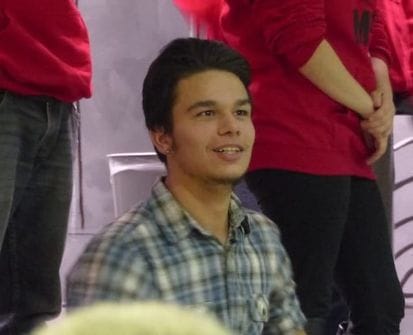 Cullen Dumbrocyo talks to members of the audience after the group's performance.
current and former juvenile offenders in which members express themselves through theater, find support in their efforts to change, and take ownership of what they’ve done.
Dumbrocyo asked the audience to see him for who he is now, not who he was or what he’s done.
“I am sorry for what I’ve done, I’m doing better things now,” he said. “I want people to learn from my story, so they don’t have to go down the same path I went down.”
“The performance was very moving and inspiring,” said interim principal, Mrs. Lori Napolitano, who was present for the play and helped in Dumbrocyo’s restoration process. “I think it certainly played a role in making up for his actions, and the message definitely resonated with me and with students.”
The theater piece began with participants marching onto the stage, wearing red, hooded sweatshirts, stomping and clapping rhythmically. One of them, portraying an authority figure, shouted “Freeze” and “All who struggle, salute.” The 15-minute performance included dialogue that dealt with racism, police brutality and the members’ wishes to be judged on who they are now, as well as a question and answer session between students and performers.
After the performance, audience members asked the group many questions, most having to do with what had led to their incarceration. But when junior Bryn Worthington took the mic, she made a statement instead.
“I think everyone in this room forgives you,” she said to Dumbrocyo, and she went on to ask those who agreed with her to stand up.
The whole audience stood as one and applauded Dumbrocyo, who looked genuinely touched by the outpouring of warmth.
“It means a lot for me,” Dumbrocyo said after the show was over. “I never had a safe spot….I never trusted anyone.
“I think most of the value came from the question and answer session,” said Mrs. Napolitano. “The questions kept getting more thoughtful and the students became more and more engaged as the conversation went on.”
Maine Inside Out has been around for nine years. Its founders and co-directors have an overall goal of using the program to change people’s attitudes about incarcerating youth in prison-like settings, which they hope will lead ultimately to dismantling the system.
“I do think we need to reevaluate how we treat juvenile offenders,” said Mrs. Napolitano. “At Bonny Eagle, we’ve adopted a restorative practices program in our in-school suspension. Instead of just assigning some sort of punishment, you work with the person to have them reflect and process, “What did I do?” “How did that affect others?” “What happened because of my actions?” and most importantly, “What can I do to make it right?”
She explains that sometimes, this tactic is more useful than traditional punishments.
“[Restorative plans] have more positive outcomes for young people, so that they can learn and grow from the experience, and the community benefits from it as well,” she said. “We’re starting a training program for Youth Court that’s built on the same premise—where students who have school-based offenses, or community offenses get help.”
"There’s a difference between punitive and authoritative,” explained Ms. Vicki Weyand, Bonny Eagle’s in-school suspension officer. “When a student becomes involved in the court system, they might have something that they did wrong, but [restorative action] gives them an opportunity to talk about what can be done. A lot of times, people make mistakes because there are other issues, and we’re hoping that we can resolve those and find better solutions.”
Now, with help from Maine Inside Out, Dumbrocyo is attending the University of Southern Maine and hopes to become an art therapist.
“I lost most of my teenage years,” Dumbrocyo told students. “I just realized I didn’t want to lose any more time.”