Trump candidacy rallies some, baffles others 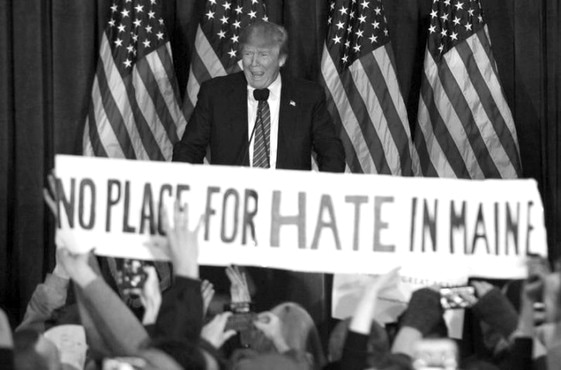 Candidate Donald Trump appeared in Portland last May. Joel Page photo
BY WYATT FOWLER
Americans seem to either love or hate Republican presidential candidate Donald Trump and his extreme ideals. When Trump came to Portland before the Maine caucuses in March, I knew I had to seize this unique opportunity to see for myself what his popularity was all about.
The speech was supposed to start at 1:30 p.m., but I arrived and began waiting in line at around 8:30 a.m. The line began to grow as the hours went on. As the line grew, so did the number of anti-Trump protesters. Trump supporters assaulted the protesters with racist, misogynistic, homophobic, and juvenile insults. The protesters were less aggressive, although at one point I saw a Trump supporter get a pie thrown in their face. Luckily, the police and secret service were there to prevent anything too violent from occurring.
When we were finally let into the building for the speech, the behavior got worse. A couple displayed a sign that read: “Love always Trumps hate.” They were promptly booed and kicked out of the rally. Another man held up a sign that said “Dump Trump” and those around him violently shoved this man out of the crowd.
I asked those around me why they supported Trump. The answers ranged from, “People shouldn't speak Spanish in America,” to “We need someone who's not politically correct,” and finally the classic “Immigrants took my job! Trump will make America great again!” -----It bothered me to hear that many supporters seemed to blame their own personal shortcomings on immigrants. I’m sure some of them were unwilling to take any responsibility for their own failures.
Trump spoke starting at around 2:30, nearly an hour later than scheduled. When he began to speak, two women behind me held up a sign that read: “No place for hate in Maine.” Within second of its appearing, the sign was ripped to shreds by Trump supporters.
After yelling some less than eloquent comments at Trump, I was violently shoved out of the room by those around me, so unfortunately I didn’t get to hear Trump’s entire speech.
But I was glad I attended the rally and got a first-hand look at how Trump’s ideals seem to attract hate and intolerance. In America, a country whose entire history is based on diversity and the unity of many different cultures, a man who is so divisive and hateful cannot be allowed to lead us.
This election will be crucial to the future of this country, and I encourage everyone to go out and vote and be as politically active as possible because this election is likely to affect our generation more than any other in the past 20 years.