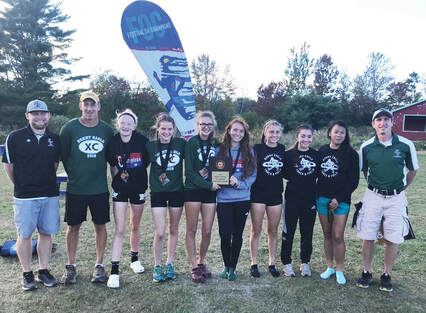 Members of the girls cross-country team pose with their trophy after the Festival of Champions in early October. Left to right, Coach Ryan Dyer, Coach TJ Hesler, Han- nah Stevens, Emma Pendelton, Delaney Hesler, Emma Abbott, Kayla Raymond, Ami Beaumier, Abigail Nelson, and Coach Michael Burleson. Photo courtesy of Cory Abbott
FROM STAFF REPORTS
The BEHS girls cross country team had five runners in the top 29 to run away from Falmouth and Camden Hills by 43 points in the Class A cross country state championships Oct. 27. Freshman Delaney Hesler was fourth in 19:02, and senior Ami Beaumier was fifth in 19:05. Kayla Raymond at 13th, Hannah Stevens at 21st and Emma Abbott at 29th rounded out the scoring.
“A full team performance,” Coach Mike Burleson told the Portland Press Herald. “Our top five had their best race of the year.”
This was the Lady Scots third title in four years. The girls also came away with a first place finish at the 17th annual Festival of Champions in Belfast in early October.
The team was competing against 58 teams from Maine and nearby states. Their overall score was a 96, 34 points better than the second place team. In that meet, senior Ami Beaumier came in third out of 610 runners with a time of 18:45.94. Freshman Delaney Hesler was 10th with a time of 19:15.15. Senior Kayla Raymond was 25th with a time of 20:01.80. In all, the team had an amazing seven girls in the top 10 percent of runners (the top 60).