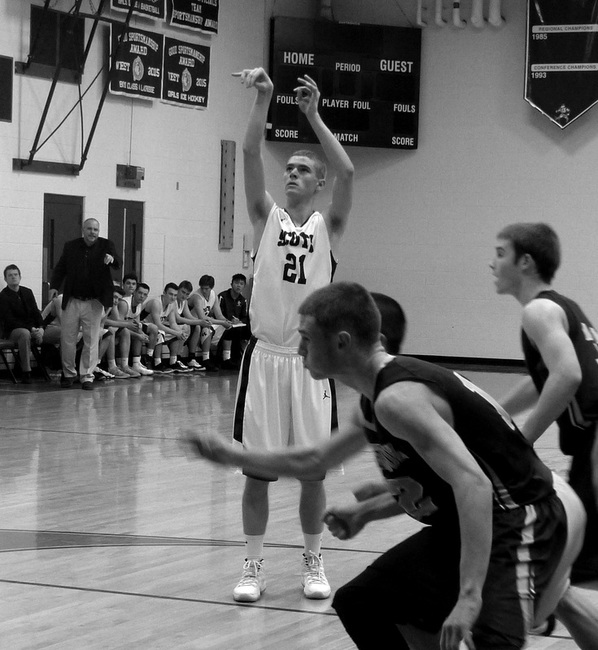 Senior Troy Bogdahn played basketball at Bonny Eagle High School and plans to study sports management at Saint Joseph’s College. Troy has received rave reviews from his teachers and coaches.
High school can bring out the best in students, showing how determined and successful they can be. Troy Bogdahn started high school as a determined freshman and is now graduating as a successful student and athlete. Through determination and focus, Troy has become the bright, intelligent, and well-rounded person that many of his teachers and classmates consider him to be today.
Troy plans to stay local for college, attending Saint Joseph’s College in the fall of 2016, where he plans to study sports management. He will also play baseball for Saint Joseph’s. The Bonny Eagle boys basketball season was not what Troy had hoped it to be, but he still enjoyed playing his senior year. Troy’s basketball coach until this year, Mr.  Phil Bourassa, commented on Troy’s work ethic on the court.
“Troy is one of the most coachable kids I have ever coached,” said Mr. Bourassa. “He’s very polite, does everything that is asked of him, shows up early, leaves late. I can’t say enough nice things about Troy.”
Not only is Troy a strong player on the basketball court, but he excels on the field as well. Coach Hessian, the boys varsity coach, admires Troy’s determination on the field.
“Troy is a great kid. I think he has tremendous work ethic on the field and on the practice field,” said Coach Hessian. “I think he has improved throughout the year and throughout the three years that I have coached him. This work ethic is a big reason why he’s gotten better every year.”
On top of his athleticism, Troy manages to remain fourth in his class academically. His secret? He balances his school work and sports, doing school work in between practices and games and in his free time as well. His Spanish teacher, Mr. Fox, comments on his presence in his Spanish class as well as in his advisory group.
“I’ve had Troy in home base and  three levels of Spanish, and in home base he is great. I’ve gotten to know him on a different level than I did as a teacher. In class, Troy was a hard worker. He really made an effort to do well in class and he did that by taking the time to study outside of class, taking the time to work in class when given that opportunity and was not afraid to ask questions.”
Through his four years of high school, Troy has made an impact on his coaches, teachers, and friends. He has been an exemplary role model for underclassmen who wish to follow an academic and sports high school and college career.