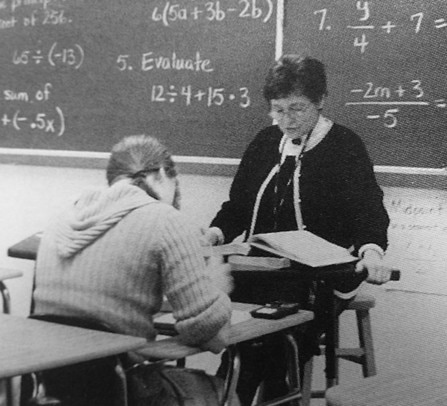 Mrs. Suzanne Dufresne will be retiring at the end of this school year after 25 years as a math teacher. Earlier this spring, she sat down with senior Megan Menard to talk about her growing up years, her career, and her future plans. The Class of 2017 has dedicated its yearbook to Mrs. Dufresne. We wish her and all our retirees a fond farewell!

​Why did you become a teacher?
When I was growing up, I was sure I didn’t want to be a teacher, and that was because I was shy and I never could imagine myself standing in front of a group of people. I think I ended up teaching because I tutored math students when I was in college, and I enjoyed being able to help somebody learn something that they had a hard time learning.
Then when I started having my family, they needed people to come in and volunteer here in the schools, so I went into the schools and I got to know my kids’ friends and started helping out, and then they needed substitutes, and I started doing that. One thing lead to another, and I ended up enjoying it, which was quite an eye opener for me, thinking I would never want to do that and ending up loving it.

As a kid did you enjoy school?
Yes, and probably because, I was good at school. You know, I was not a troublemaker. I did what I was supposed to do. I did my homework, and most of the subjects weren’t a struggle. Some of them I didn’t like as much, and that was hard, but not so much that I hated school.
What kind of student were you?
Again, part of my personality was shy and I wanted to be good at something, so I really worked hard to be a good student.
What was your favorite class in school?
Probably math. That’s why I majored in it.
What were your best memories throughout school?
Probably it was being part of the clubs and sports teams and things like that because you get to be part of a group and feel a part of something, which was important for me.
What was your worst memory?
Having to give a speech at graduation. Writing the speech was okay, but having to stand in front of everybody, was horrible. It went okay, but it kind of ruined graduation for me, worrying about it so much.
Was there a teacher who had a particularly strong influence on your life?
As funny as it sounds, it was my English teacher. She really pushed me to become a better writer, and I don’t like writing, and when I say writing I don’t mean creative writing. But she really taught us the mechanics of how to write: the grammar and everything to be a good communicator,  to write clearly and concisely, and try to make things coherent. She was an amazing and very eccentric person, but that was an example of getting pushed, and pushed, and pushed, and pushed to do over, and do over, and do over, and make things better.
Did you ever think of teaching anything other than math?
Music maybe. I’ve been involved with music my whole life. I took piano from the time I was young. That’s probably the only other thing I would consider.
What are your plans after retirement?
I would like to go to Ireland, where my family is from. That’s probably the big trip that we would do. And, I will probably visit my oldest son and his family in Pennsylvania more often. I also want to be able to do some volunteer work. I have a lot of interest in environmental programs, anything that has to do with children or animals. And, doing some quilting, which I haven’t had time to do either.
Do you plan to do any substitute teaching after you retire?
I think so, especially at first, while I still know a lot of the kids here. I think having a relationship with the students and knowing them makes substituting a little bit easier.
When you look back, are you surprised that you taught for as long as you did?
I didn’t think I would like teaching, but I think that’s why it is important to keep your options open. When kids say, ‘I hate this,’ or ‘I don’t like this,’ or ‘I’ll never do that,’ I say, ‘You never know.’