The show must go on...and it sure did! 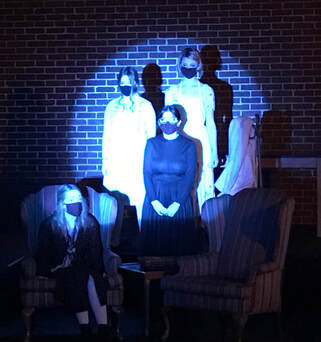 FROM STAFF REPORTS
Dec. 22, 2020
Solving problems is half the fun of producing a play. The problems surrounding Bonny Eagle’s production of Radium Girls made for an experience that the cast and crew will never forget.
“Outdoor theater was, largely, extremely bizarre, and very cold. There were obstacles to overcome that we had never had to worry about before, such as the elements, masks, and even the dog across the street,” said senior Alison Jones of the Bonny Eagle Drama Club.
Drama Director Ms. Marianne Pillsbury and the student drama officers started planning the fall play over the summer.
“However, we really didn’t know whether we would be doing an in-person performance or a virtual Zoom performance until we got back to school,” said Ms. Pillsbury. “Our first month of rehearsals were all online, then we switched to in-person outside in October. We were only allowed to rehearse outside for the most part, just like the fall sports teams.”
One of the biggest challenges was figuring out how to hook up the lighting without tripping a fuse. “(It) took us a few tries, but our maintenance people were very helpful and supportive of our efforts,” said Ms. Pillsbury.
Blocking the play with actors staying three feet apart and wearing masks was a challenge, too.
“It was kind of strange for the actors to be wearing masks but it also kind of worked with the play,” said Ms. Pillsbury. “It was kind of funny though when actors were supposed to be eating or smoking a fake cigar but they were wearing masks!”
Alison said the inclusion of masks and (especially Saturday) background noise made it far more of a challenge.
“We had to make costumes that were warm enough for our actors, and our techies had to be outside the entire time, which can't have been fun out in that weather,” she said. “I'm constantly impressed by the work they do, both in years up to now and in the difficulties of this past season.”
Alison agreed that the lighting situation was the biggest headache.
“When the rain hit on Friday, they were covered, but unfortunately with a canvas which would absorb water. That formed a sort of heavy sail, which caused the lights to fall, break, and become waterlogged. It really seemed like they weren't going to work for our next performance,” she said.
Alison said a group of the club’s main techies, including Alexavier Smith, Samuel Phelps, and Emily Jones, were able to work with Ms. Pillsbury and former  director Mr. Rick Osann to get them working again.
“It was a huge breath of relief to find out that we would be able to have our second night of performances, “ Alison said.
On the first weekend’s Saturday performance, about 35 people attended in person and 30 people logged onto the live stream, which was accessed through a link emailed to people who purchased tickets online.  At the following weekend’s Friday night performance, about 25 people live streamed and 30 attended in person, according to Ms. Pillsbury.
Now that Radium Girls is history, Bonny Eagle Drama is planning for the Winter One Acts, a regional competition which is held each March. Those plans are now on hold because of the suspension of winter activities due to Cumberland County being in the yellow zone until at least Dec. 31.
Even after those restricitons are lifted, the club will be planning for a competition that will have to be held virtually.  Despite that, Alison said, “It’s going to be a fun and very interesting challenge to put on.”
Kaylei Myers contributed to this report